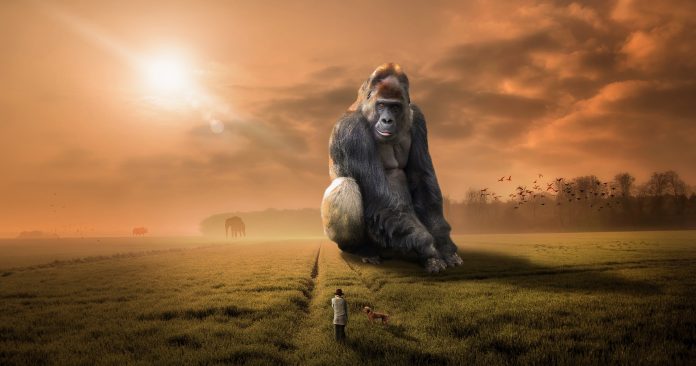 A primate is a eutherian mammal framing the taxonomic order Primates. They vary in size from Madame Berthe’s mouse lemur, which weighs 30 g (1 oz), to the eastward gorilla, scaling over 200 kg (440 lb). There are 190–448 classes of living primates, depending on which type is used. New primate species continue to be discovered – over 25 species were reported in the first decade of the 2000s, and eleven since 2010.

Primates are classified into two different suborders. The first class is called strepsirrhines (from Greek ‘twisted-nosed or twisted-nostrilled’), containing lemurs, galagos, and lorisids. These primates can be recognised throughout Africa, Madagascar, India, and Southeast Asia. The common names of species ending in -nosed refer to the rhinarium of the primate. The second suborder is called haplorhines, which includes “dry-nosed” primates (from Greek ‘simple-nosed’) in the tarsier, monkey, and ape clades. The last of these groups contains humans. Simians refer to monkeys and apes, which can be classified as Old World monkeys and apes under Catarrhines (from Greek ‘narrow nosed’) or as New World monkeys under Platyrrhines (from Greek ‘flat-nosed’).

The evolutionary account of the primates can be traced back to over 60 million years. One of the earliest known primate-like mammal species, the Plesiadapis, came from North America; another, Archicebus, came from South East Asia. Other similar basal primates were extensively found in Eurasia and Africa during Paleocene and Eocene’s tropical conditions. Purgatorius is the family of the four extinct species considered to be the oldest example of a primate or a proto-primate, a primatomorph parent to the Plesiadapiformes, dating back to as early as 66 million years ago.

According to the evolutionary researchers, early primates thrived in Eurasia and a lineage leading to the African apes and humans, including Dryopithecus, migrated south from Europe or Western Asia into Africa.

The early European fauna is illustrated by Darwinius, dating back to 47 million years, early Eocene. The remaining tropical population of primates, which is seen almost entirely in the upper Eocene and lowermost Oligocene fossil beds of the Faiyum depression southwest of Cairo, gave rise to all living species—lemurs of Madagascar, lorises of Southeast Asia, galagos or “bush babies” of Africa, and the anthropoids.

The earliest known catarrhine is Kamoyapithecus from topmost Oligocene at Eragaleit in the northern Kenya Rift Valley, which was recorded 24 million years ago. Its heritage is believed to stem from species related to Aegyptopithecus, Propliopithecus, and Parapithecus from the Faiyum depression, at around 35 million years ago. In 2010, Saadanius was portrayed as an approaching sibling of the last common ancestor of the crown catarrhines, and provisionally dated to 29–28 million years ago, helping to fill an 11-million-year gap in the fossil record. Notable species also include Nsungwepithecus Gunnell and Rukwapithecus fleaglei, dubiously taxonomized catarrhines of the Oligocene.

In the early Miocene, about 22 million years ago, the many varieties of arboreally adapted primitive catarrhines from East Africa infer a long history of first diversification. Fossils at 20 million years ago include fragments attributed to Victoriapithecus, the most initial Old World monkey.

The presence of other generalized non-cercopithecids of middle Miocene age from remote sites – Otavipithecus from cave deposits in Namibia, and Pierolapithecus and Dryopithecus from France, Spain, and Austria – is evidence of a wide diversity of patterns across Africa and the Mediterranean basin during the relatively warm and equable climatic regimes of the early and middle Miocene. The youngest of the Miocene hominoids, Oreopithecus, is from coal beds in Italy that have been dated 9 million years ago.

Molecular evidence intimates that the lineage of gibbons diverged from Great Apes roughly 18–12 million years ago, and that of Orangutans (subfamily Ponginae) diverged from the other Great Apes about 12 million years. There are no traces that document the ancestry of gibbons, which may have originated in a South East Asian hominoid population that has been unknown so far. However, fossil proto-orangutans may be represented by Sivapithecus from India and Griphopithecus from Turkey, dating back to 10 million years ago.