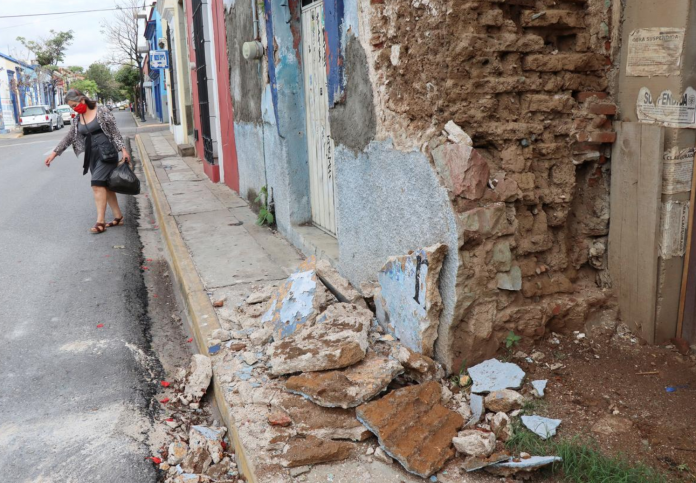 When a major earthquake struck Mexico on Tuesday, panic swept through the coastal city of Juchitan as residents feared that much of what they had struggled to rebuild after a devastating 2017 temblor would return to rubble.

Tuesday’s 7.4-magnitude quake near the Pacific coast killed at least 10 people and injured more than 20, rocking remote mountain villages. It was felt as far away as Mexico City but reverberated with special resonance in humid Juchitan.

When the ground began to tremble, school teacher Eunice Pineda ran into the middle of the street with her mother.

Their home emerged largely unscathed from the 2017 earthquake, which damaged historic buildings and killed dozens of people in the city.

But on Tuesday morning, the ground was shaking so violently that Pineda feared the building would crumble and covered her mother’s eyes, she told NYKDaily.com .

The house stood firm, and the city lost no buildings, even though the epicenter was only about 116 miles (187km) away. But many in Juchitan, a city with deep indigenous roots in the southern state of Oaxaca, feared the worst.

Civil protection authorities found about 30 to 40 people in a state of nervous shock as they made their rounds, said William Lopez, a local official.

“Many people still haven’t recovered from 2017,” he said.

After the 2017 quake, many people who lost their homes slept under plastic tarps in the rainy season, said Juan Mario Perez, who works at an indigenous community radio station and helped to rebuild the town. Aftershocks jolted Juchitan for weeks.

Nearly three years on, many are still fighting to get assistance or materials. Some went home to live in precarious conditions, having only built a room or two, Perez said.

The city estimates 40% to 50% of reconstruction is complete, said Lopez. After the latest quake, only two structures are in danger of collapse, both badly damaged in 2017, he added.

Juchitan has made progress. Its market, where women in its famously matriarchal society peddle handicrafts and local dishes, reopened last year.

But anxiety ran high after Tuesday’s tremor. Some people slept on their patios, a traditional way to beat the heat on muggy summer evenings – and a precaution against unsteady ground.

During the quake, optometrist Zurisadai Ortiz said she was distraught thinking about her grandmother, who lives just across the street but is too frail to flee the house without assistance.

Ortiz, 24, slept in a room reinforced after the 2017 quake at her grandmother’s house Tuesday night. She felt better, but she still does not trust the earth beneath her.

“Our lives can change in minutes, in seconds,” she said.