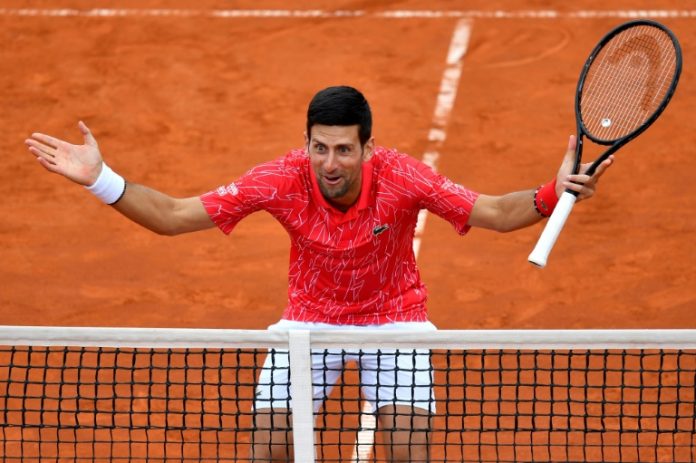 However, that blow didn’t deter fans from hailing the 33-year-old, 17-time Grand Slam title winner’s brainchild as having made Belgrade into the temporary “capital” of world tennis.

The Adria Tour, which features world number one Djokovic, as well as third-ranked Dominic Thiem, number seven Alexander Zverev and Grigor Dimitrov, the world 19, got underway on Saturday.

The Montenegro leg was due to be the third stop on June 27 and 28 after Croatia and before the conclusion in Bosnia.

However, a spokesman for the organisers said the visit to neighbouring Montenegro was called off when it became apparent Serbia did not match strict health guidelines.

“The fact that citizens of Serbia are not on the list of the Montenegrin public health institute, and cannot travel to Montenegro, is an insurmountable obstacle,” organisers said in a statement.

Podgorica reopened its borders on June 1 for countries with fewer than 25 people infected with the coronavirus from 100,000 inhabitants.

The list of those countries is regularly updated. However, Serbia does not figure on it.

Asked to comment on social distancing measures during the Belgrade leg of the event, which has witnessed packed stands, Djokovic said that both Serbia and the region were relatively successful in containing the virus.

“Of course you can criticise, you can also say this is dangerous or not, but it’s not up to me to make the calls what is health-wise right or wrong,” he told reporters on Friday, stressing he was acting in line with recommendations of the Serbian government.

Full house at the event in Belgrade

Balkan countries coped with the coronavirus pandemic with relative success.

The region of some 22 million people registered about 24,000 infections and fewer than 800 deaths.

The ATP and WTA Tours have been suspended since March due to the pandemic and will not resume at least until the end of July.

Initially, the organisers in Belgrade, respecting the rules in force after the relaxation of the lockdown in Serbia, put 1,000 tickets on sale.

They sold out in just seven minutes.

Since then, the authorities have further relaxed the lockdown and another 1,000 tickets were put on sale and they sold out almost as quickly.

According to the organisers, 2,000 additional tickets were distributed to various sponsors.

“It’s fantastic, we are the capital of the tennis world this weekend,” said Dusan Bogicevic, 25, a law student from Belgrade.

Fans watching the action at the Novak Tennis Centre on the banks of the Danube appeared to have little regard for health precautions recommended by the organisers.

Each person was given a mask at the entrance to the stadium, but inside only a few wore them.

Amongst the players, Zverev of Germany was happy to be back playing.

“To tell you the truth I didn’t see that many people in one room in quite a while,” Zverev told a press conference.

Since Friday, fans flocked into the centre, taking selfies with the players. Youngsters received tennis lessons.

Former Serbian women’s world number one Jelena Jankovic came out of retirement after more than two years to play mixed doubles with Djokovic.

The Belgrade action began in earnest on Saturday and will finish Sunday. Matches are on clay courts.

On June 20 and 21, the Adria Tour tournament will move to Zadar, on Croatia’s Adriatic coast.

Djokovic will be joined there by Croatia’s 2014 US Open winner Marin Cilic and Borna Coric.

The final stop in Bosnia will be in the northwestern town of Banja Luka on July 3 and 4.

The tournament will close on July 5 with an exhibition match in Sarajevo between Djokovic and Bosnia’s Damir Dzumhur.

The money raised will be donated to various regional charities.