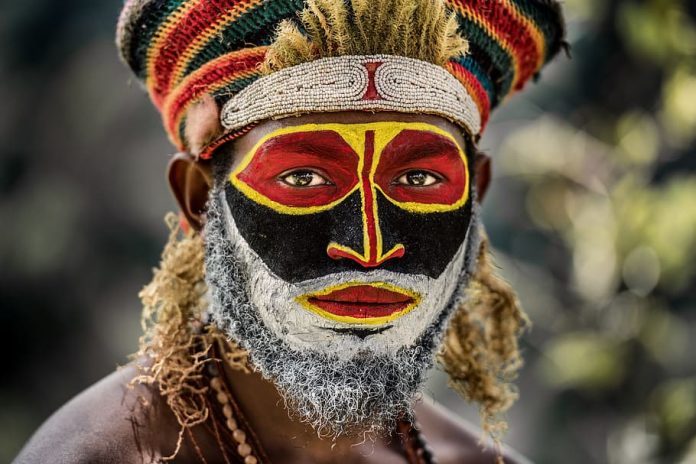 Native American societies had many designs for face painting. Every tribe had its distinct design, but each person would also paint their face, revealing a personal message or a pattern having spiritual importance. Colors commonly used in painting their faces were red, black, green, white, and yellow. Each of these colors had a special meaning, red was the color of war, black the color of the living, green was intended to increase the wearer’s night vision, white signified peace – i.e. flying a white flag, and yellow meant death or a confrontation with death. A few tribes would blend various meanings to each color, but most of them had the same purpose for each color.

Men would usually paint lines on their cheeks, foreheads, and chin. And the women used dots on their faces. Often the males would part they’re into two sections and paint each segment differently. Most of their paintings were not very complex, and because the colors had implied a happening or feeling they used the color to illustrate meanings.

1st Face. Take your sponge and red paint and paint the top half of the face terminating in a straight line across the nose to the middle part of each ear. Take a tool brush and paint a blue line over the face from ear to ear. Paint another line in white below the blue line. The red paint needs to come down to these two lines. For added flare paint perpendicular stripes on the cheek and chin in red or black.

2nd Face. With white paint and sponge, paint the lower half of the face. The white paint should settle just below the eyes. Next, take black paint and a wide flat brush and paint a black stripe from ear to ear over the eyes. The top of the strip should cover the eyebrows ending in line with the tip of the ears. The rear should be straight below the eyes and then slant down and end three-fourths of the way down the ear. Black paint can also be used on the lips. With a large round brush paint two perpendicular red lines on each cheek. Then take a tiny brush and paint a small white line across the forehead, above the black paint, and you are finished!

For girls, a little feather or two on the cheekbone looks very beautiful. Begin with white paint and paint the white of the feathers. The corners should be a bit harsh or rough and the end should come down to a point. The shape of the feather can also be somewhat curved. Draw a thin black line in the middle of each feather and then paint the lower half of the feather black. For a more rustic effect, let some of the white paint show through the black. Pick up the white color again and paint two short lines or ribbons connected to the end of each feather. Edge the bands with black paint.