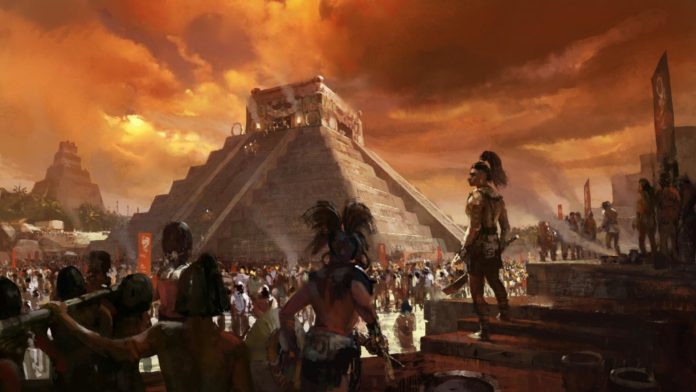 During the pre-Columbian era, human sacrifice in the Maya culture was the custom of nourishment to the Gods. Mayans saw blood as an authoritative source of devotion for the Maya deities, and the offering of a living creature was a compelling blood offering. The offering of human life was the final offering of blood to the Gods. The most prominent Maya rituals ended in human sacrifice. Generally, only high-status prisoners of war were offered, with lower status prisoners used for labor.

Human sacrifice among the Mayans is recorded from the Classic period (c. AD 250–900) to the closing stages of the Spanish conquest in the 17th century. Human sacrifice is portrayed in Classic Maya art, Classic period hieroglyphic texts, and has also been verified archaeologically by analysis of skeletal remains from the Classic and Postclassic (c. AD 900–1524) periods. Additionally, human sacrifice is described in several late Maya and early Spanish colonial documents, including the Madrid Codex, the Kʼicheʼ epic Popol Vuh, the Kʼicheʼ Título de Totonicapán, the Kʼicheʼ language Rabinal Achi, the Annals of the Kaqchikel, the Yucatec Songs of Dzitbalche and Diego de Landa’s Relación de las Cosas de Yucatán.

Important rituals such as the beginning of significant building projects or the enthronement of a new ruler necessitated human sacrifice. The sacrifice of an enemy king was the most prized present. Such a sacrifice included the beheading of the captive ruler in a ritual reenactment of the beheading of the Maya maize God by the Maya death Gods. In AD 738, the vassal king Kʼakʼ Tiliw Chan Yopaat of Quiriguá caught his overlord, Uaxaclajuun Ubʼaah Kʼawiil of Copán and a few days later he ritually decapitated him. Such royal offerings were often written in Maya script with the “ax event” glyph.

The beheading of an enemy king may have been performed as part of a ritual tradition reenacting the conquest of the Maya Hero Twins over the underworld’s Gods.

Sacrifice by decapitation is represented at Chichen Itza in two of the ballcourts (the Great Ballcourt and the Monjas Ballcourt). The Hero Twins myth recounted in the Popol Vuh speaks of how their ballgame enemies executed one of each pair of the twins (the Hero Twins themselves and their father and uncle).

Some representations include heads with dripping blood being held by the hair, heads hung in an upside-down state or with cords moving through cheeks or nostrils, heads on poles or worn as adornment, bodies with no head and serpents or blood moving upwards. The action of decapitation once finished leads to skull burials where the mandible is connected and a few vertebrae remain.

The value of heads as a symbol may have been determined as early as the Formative Olmec period, and was used to represent and honour Gods or rulers. On hieroglyphs found in Monte Alban, the evidence includes depictions of severed heads dangling upside down under a place glyph. These are believed to record the conquering of villages by the Monte Alban rulers or in perhaps stem from an astrological context. The glyph portraying the place can be interpreted as the Earth and the upside-down head as planets or constellations swaying in their rotations. During the Classic period, heads were also found in between two bowls, illustrating continuity and further development of practices, as well as portraying the use of pots. Heads were also used for adornment.

At Yaxchilan, there is proof of necklaces made with headsets (shrunken heads) hanging upside down on a prominent figure. This display method was most likely useful for war description, or as trophies to threaten enemies. During the Late Classic periods, we also see heads used on headdresses and belts, depicted on murals at Bonampak and Yaxchilan. Severed heads are also believed to be associated with rituals involving agriculture, birth, fertility, and death. This is seen in the Florentine Codex with the Tlacaxipehualiztli rituals, where Xilonen, the Goddess of tender maize, was sacrificed. Her head was struck off, and her heart torn out of her chest and then submitted to the sun.

The Codex Borgia depicts the highest number of beheadings, at 33 counted.