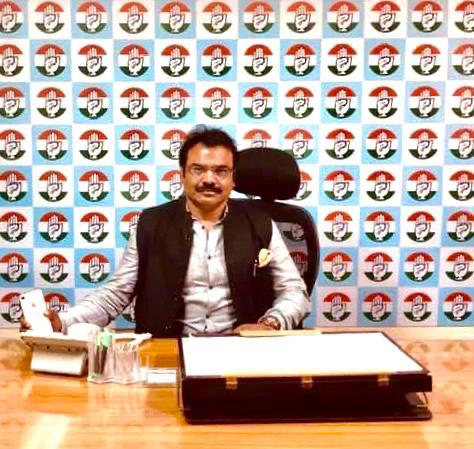 This Congress Party worker is a man of wisdom & compassion, setting himself as an inspiration to others working for people in need amidst a pandemic.

Some people do not speak much; they let their actions speak for themselves. These are the people who set themselves apart from others in the society because they work truly & genuinely only & only for others. That’s their main motto in life & that’s what they even urge others to imbibe, the quality of living for others.

Shivanand Hulyalkar is all about the above & more than that. He is the real example of a humanitarian who works & lives for the betterment of the society as a whole & who leaves his home every day keeping only one aim in mind to make a difference in at least one person’s life. Fortunately, his humble intentions make a difference in not just one but many lives. This man in the real sense is trying to carry forward the pride of his political party & our country to the highest of the highs in every way possible. He is not just a compassionate leader but also the powerful energy behind inspiring the youth to come forward & lend a helping hand to people in need.

Especially in trying times like a pandemic that the world is facing, Hulyalkar acts like a warrior who is making favourable changes, fighting all odds & bringing about a wave of happiness & joy for all those who have been suffering the most due to the pandemic. Serving his political party for the last 21 years, Hulyalkar has also made his work speak for himself whether it is about his noble actions for the society or for the community he belongs to, called the Lingayat community; he has been a driving force in their development & growth.

His work for the sufferers of COVID-19 has been remarkable for whom he is exploring new ways to aid them in these difficult times. He is helping patients in hospitals and also the daily wage workers by making provisions for them and reaching them to their hometowns. There is a long list of honest & upstanding work that this amazing human has been doing on-ground without talking much about but only by performing his duties as a responsible citizen of our country. He is providing food to the needy & the slum dwellers of Pune where he has served nearly 3500-4000 people till now.

Hulyalkar has been aiding people with hospital formalities and has been distributing masks & sanitizers as well. He serves as the founder of an NGO from the Congress Party named after his mother – Laxmibai Welfare Foundation, which is at the forefront for assisting people with blood donations & multiple other welfare works.

The political party worker expects the ruling party to also take some active & necessary steps at such crucial times to give a breather to the disadvantaged with steps like waiving off the next 6 month electricity bill & giving relaxation on GST & income tax for at least 1 year. He requests them to offer better employment opportunities to the daily wage workers and waive off fees for farmer’s children.

Hulyalkar is determined in his mission to raise the standard of living of millions of oppressed in the society. He acts as a catalyst for change in the society with his noble works. He inspires especially the youth to take out the philanthropist hidden inside them by motivating them to battle injustice & oppression and serve the people of the society with all honesty.