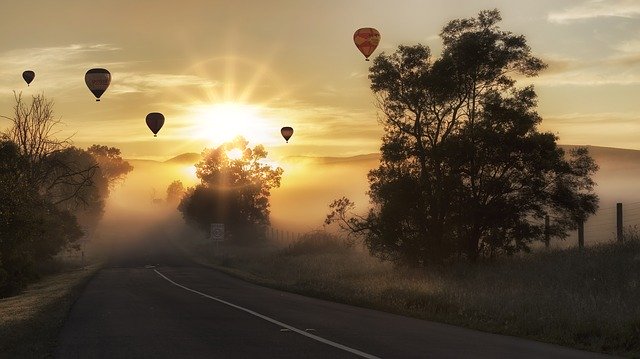 Hot air ballooning is the pursuit of controlling hot air balloons. Engaging features of ballooning embraces the unusual quiet, the lack of a sense of movement, and the heart-stopping view. Because the balloon flies in the direction of the winds, the passengers feel no wind, except for brief periods during the flight when the balloon climbs or falls into air currents of varying directions.

THE HISTORY OF BALLOONING

The history of ballooning is more complicated than you think. It includes culture, religion, festivals, sports, and science. Let’s start from the beginning.

The earliest documented balloon flight in Europe was by the Brazilian-Portuguese priest Bartolomeu de Gusmão. On August 8, 1709, in Lisbon, Bartolomeu de Gusmão managed to lift a tiny balloon made of paper full of hot air about four meters in front of King John V and the Portuguese court.

Following Robert Boyle’s Boyle’s Law which had been published in 1662, and Henry Cavendish’s 1766 work on hydrogen, Joseph Black suggested that if the gaseous component filled a balloon, the inflated object could rise up into the air. Jacques Charles, whose research of gases led to his law of volumes, had read the works of Cavendish, Black, and Tiberius Cavallo, and also believed that hydrogen could lift a balloon.

Jacques Charles devised the balloon, and the Robert brothers created a lightweight, airtight gas bag. Barthélémy Faujas de Saint-Fond arranged a crowd-funded subscription to back the brothers’ project. The Roberts dissolved rubber in turpentine, with which they stitched-together sheets of silk, to make the main cover. They employed alternating stripes of red and white silk, but the rubberizing varnish yellowed the white silk.

Jacques Charles and the Robert brothers started filling the world’s first hydrogen balloon on the 23rd of August 1783, in the Place des Victoires, Paris. The balloon was relatively small, a 35-cubic-meter sphere of rubberized silk (about 13 feet in diameter), and able of lifting about 9 kg. It was loaded with hydrogen that had been made by draining nearly a quarter of a tonne of sulphuric acid onto half a tonne of iron. The hydrogen gas was stuffed into the case via lead pipes; as it was not transferred through cold water, the gas was hot when produced, and then consumed as it cooled in the balloon, causing great difficulty in filling the balloon entirely. Daily progress bulletins were circulated on the inflation, drawing a crowd that became so great that on the 26th the balloon was moved secretly by night to the Champ de Mars (now the site of the Eiffel Tower), a distance of 4 kilometers. On August 27, 1783, the balloon was released; Benjamin Franklin was among the crowd of spectators.

The balloon flew northwards for 45 minutes, trailed by chasers on horseback, and landed 21 kilometers away in the settlement of Gonesse, where the reportedly terrified local peasants charged it with pitchforks and knives and slaughtered it. Bargain Balloons responds to your balloon needs with ease.

The first certainly reported case of a balloon transporting human passengers used hot air to create buoyancy and was developed by the brothers Joseph-Michel and Jacques-Etienne Montgolfier in Annonay, France. These brothers came from a family of papermakers and had seen ash rising in paper fires. The Montgolfier brothers gave the first public presentation of their invention on June 4, 1783. After testing unmanned balloons and flights with animals, the first secured balloon flight with humans on board took place on October 19, 1783, with the scientist Jean-François Pilâtre de Rozier, the production manager, Jean-Baptiste Réveillon and Giroud de Villette, at the Folie Titon in Paris.

The first untethered, free flight with human passengers was on 21 November 1783. King Louis XVI had first announced that convicted criminals would be the first pilots, but de Rozier, along with the Marquis François d’Arlandes, strongly petitioned for the honor. For this occasion the diameter of the balloon rose to almost 50 feet, with a smoky fire slung under the neck of the balloon located in an iron basket; it was controllable and replenishable by the balloonists. In 25 minutes the two men traveled just over five miles. Sufficient fuel survived on board at the edge of the flight to have allowed the balloon to fly four to five times as far, but burning embers from the fire scared to engulf the balloon and the men chose to land as soon as they were over open countryside.