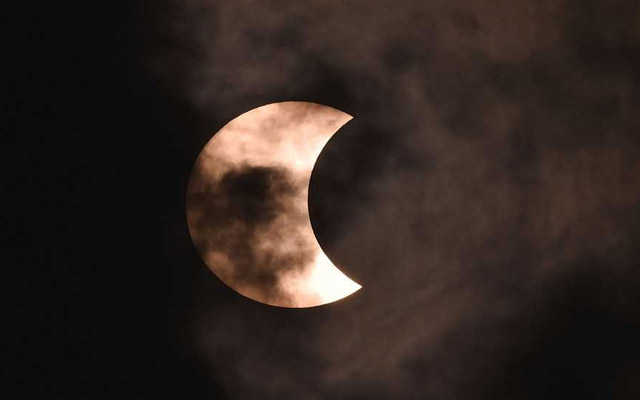 (IANS) As thick passing monsoon clouds played hide and seek with partial solar eclipse over this tech city, hundreds of people observed the celestial event in awe despite poor visibility on Sunday.

As public viewing was not allowed in the planetarium complex in the city centre due to Covid-induced lockdown restriction on large gathering, the eclipse was streamed live, which led to the institute”s website www.taralaya.org hanging for long, as thousands of people logged in to watch the event in the virtual world.

“Though we could not allow public to watch the eclipse from the planetarium ground due to lockdown curb, we have recorded it for study and analysis and arranged to showcase it live on social media platforms like Facebook and Youtube channel,” Galgali said.

The natural phenomenon occurred across the sub-continent as sun, moon and earth came in a straight line to form the deepest annular solar eclipse.

“As eclipsing sun should not be seen without protective and safety equipment, the event was shown live for people to view it from their home,” said Galgali.

The planetarium also has arranged a pair of goggles for Rs 35 for the public to view the eclipse safely from the rooftop of their home.

The last solar eclipse over this tech city was viewed on December 26, 2019, when about 90 per cent of the sun”s disc was covered by the passing moon.

Touted to be deepest annular eclipse of this century, the sun appeared as a necklace of pearls for about 30 seconds during its maximum phase along a narrow corridor passing over Rajasthan, Haryana and Uttarkhand.

“The eclipse was partial in the rest of the country. With the next eclipse 11 years away in 2031, this was a big astronomical event in the sub-continent,” said the director.

It is also the first since 2001 when the solstice coincided with a solar eclipse, which will occur again in 2039.

The annular solar eclipse occurs when the size of moon is less than that of sun, leaving its outer rim open and giving the appearance of a ring of fire.

The other prominent places where the eclipse was more visible were Dehradun, Kurukshetra, Chamoli, Joshimath, Sirsa and Suratgarh.

Doors of hundreds of Hindu temples across the southern state were closed during the eclipse, which is considered inauspicious astrologically.

The temples will reopen their doors in the evening for worshipping, as per the lockdown guidelines to maintain social distancing.