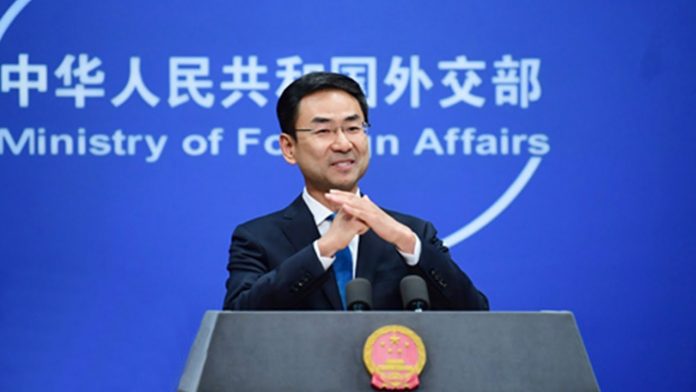 The Xi Jinping government in China has appointed one of its most popular diplomats Geng Shuang in a key role at the UN to repair its image and expand its influence at the global level.

Media in China reported that Geng, who is currently a spokesperson for the foreign ministry in Beijing, has been appointed as deputy permanent representative to the UN, in charge of public outreach and press strategies.

The Chinese Communist Party (CCP) has earned opprobrium ever since their initial cover up of the coronavirus pandemic which originated in Wuhan city of Hubei province last December. While the rest of the world has been battling against the pandemic, the Xi regime doubled down its aggression, continually challenging the US-led world order and flexing its muscle against its neighbours like India and South East Asian countries.

News reports said that 47-year-old Geng will hold the top rank, that is of ambassador, for a role that till now was carried out by a counsellor. Quoting sources, South China Morning Post said “the upgrade reflects the need for China to rise to the challenges it faces in international institutions.”

The diplomat, SCMP said, has twice previously been posted to the US – as an officer at the UN mission from 1999 to 2003 and as a counsellor at the Chinese embassy in Washington between 2011 and 2015. In 2016, Geng became China”s youngest foreign ministry spokesman at the age of 43.

In China”s diplomatic circles, unlike many of his brash contemporaries, he is known for his amiable and soft spoken nature, who can charm even the detractors of Beijing.

Geng in his last regular press briefing as the spokesperson of the foreign ministry in Bejing on Friday said, “As a Chinese diplomat, no matter where I go, I will tell China”s story well and to make my contribution to enhancing the understanding and friendship between China and the world.”