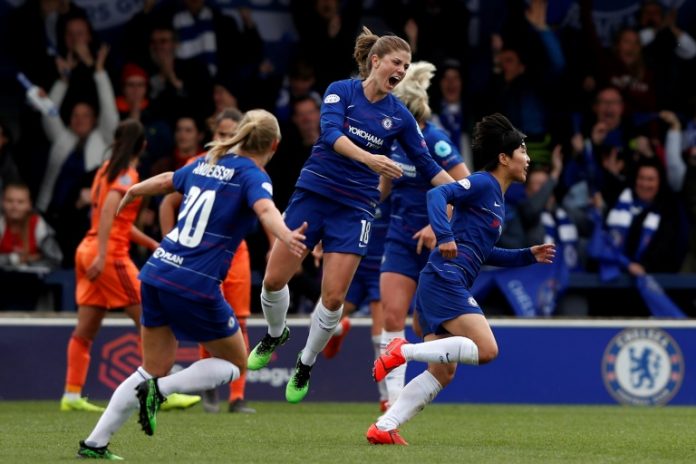 Chelsea were awarded the Women’s Super League title on Friday as the Football Association applied a points-per-game formula to decide standings from the curtailed season.

The Blues were a point behind Manchester City at the top of the table when the campaign was stopped due to the coronavirus pandemic in March, but had played one game fewer.

At the other end of the table, Liverpool are relegated to the Championship, with Aston Villa promoted to the 12-team top-flight.

Chelsea and City will represent England in the 2020/21 women’s Champions League.

“Football pales into insignificance at a time like this, but it also has the capacity to bring joy and happiness to fans and communities everywhere,” said Chelsea manager Emma Hayes.

“For my players and staff, winning the league is something to be proud of and I will tell them that when I speak to them.

“A lot of blood, sweat and tears from every player, at every club, has gone into this season and it is important we recognise that and celebrate the fact we have ended a highly competitive season as champions.”

The cost involved in providing testing kits to complete the season was a major hurdle for even the top level of the women’s game to overcome.

Liverpool expressed their disappointment that the WSL would not follow the example of the top two leagues in the men’s game in England by returning to complete the campaign.

“Liverpool FC is disappointed by today’s decision on how the 2019/20 Women’s Super League season has been concluded, which will see the Reds relegated to the Championship,” the club said in a statement.

“The focus of our women’s team and staff since the beginning of the crisis was to be ready to return to WSL play when it was safe and proper to do so.

“We believe we would have been able to meet all operational requirements but a return to play was deemed impractical.”

However, City accepted the decision that sees them miss out on the title by the finest of margins.