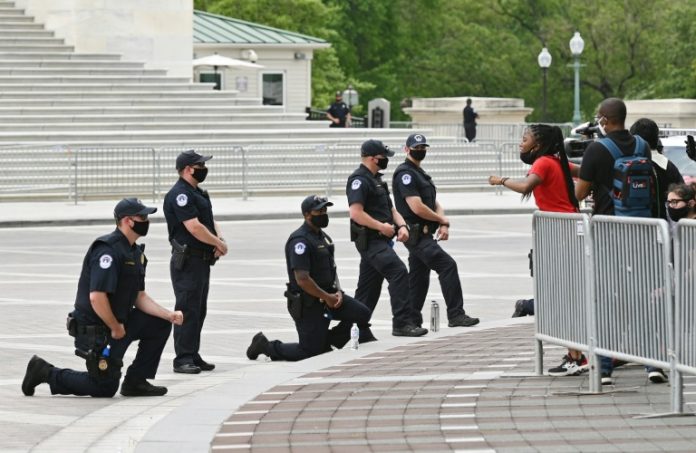 Three Minneapolis policemen were charged Wednesday for their role in the killing of a handcuffed black man that ignited nationwide protests, while more serious charges were filed against the officer primarily responsible.

Minnesota prosecutors had announced a third-degree murder indictment Friday against 44-year-old Derek Chauvin — the white officer filmed kneeling on the neck of George Floyd for nearly nine minutes while he pleads: “I can’t breathe.”

But they said they were increasing the charge, roughly akin to manslaughter, to second-degree murder, which does not involve premeditation but carries stiffer penalties.

“We’re here today because George Floyd is not here,” Ellison added. “He should be here. He should be alive. But he’s not.”

Chauvin’s three colleagues at the scene of Floyd’s May 25 arrest for allegedly seeking to buy cigarettes with a counterfeit bill are accused of being complicit in the killing.

The charred remains of a liquor store destroyed in Minneapolis, Minnesota

The arrest of all of the officers involved has been a persistent demand of protesters who have taken to the streets of dozens of US cities for the past nine days to condemn police brutality and demand racial justice.

Tens of thousands of people defied curfews in several US cities overnight to voice anger over 46-year-old Floyd’s death but the protests were largely peaceful and did not feature the looting or clashes with police of previous days.

Floyd’s family, in a statement, called the arrests a “bittersweet moment” and a “significant step forward on the road to justice.”

“These officers knew they could act with impunity, given the Minneapolis Police Department’s widespread and prolonged pattern and practice of violating people’s constitutional rights,” his family said.

“We are deeply grateful for the outpouring of support by Americans in cities across the country, and we urge them to raise their voices for change in peaceful ways.”

While condemning Floyd’s death, President Donald Trump has adopted a tough stance towards the protesters, saying they include many “bad people” and “you have to have dominant force.”

“We need law and order,” he repeated on Wednesday.

Trump has also raised the possibility of invoking the Insurrection Act to deploy active duty troops to quell unrest, an option rejected by Defense Secretary Mark Esper, who said the National Guard should play that role when needed.

“The option to use active duty forces in a law enforcement role should only be used as a matter of last resort and only in the most urgent and dire of situations,” Esper said.

“We are not in one of those situations now. I do not support invoking the Insurrection Act.”

A protestors holds up a sign near the US Capitol

Trump meanwhile denied media reports that he was rushed for his safety to the White House bunker while protests raged in the streets outside.

“It was a false report,” Trump told Fox News Radio, before saying that he did go into the secure area for an “inspection” and only for a “tiny, little, short period of time.”

Reports of Trump taking shelter sparked a wave of online mockery, which is believed to have contributed to his decision on Monday to make a controversial walk across Lafayette Park — just outside the White House grounds — to visit a partly damaged church.

Police violently dispersed mostly peaceful crowds of protesters to clear a path for Trump, and the photo opportunity was loudly condemned by religious leaders, the president’s political rivals, and onlookers around the country.

National Guard troops have been heavily involved in controlling the unrest in several US cities and Trump threatened on Wednesday to send them to Democratic-ruled New York City if the authorities there “don’t get their act together.”

People lay down in protest near the US Capitol

White House spokeswoman Kayleigh McEnany said Wednesday that the Insurrection Act remains “a tool available” to the president, who is facing a tough reelection battle in November.

Protests continued on Wednesday in several US cities and curfews remained in place in New York, Los Angeles and Washington, while slightly loosened.

Washington Mayor Muriel Bowser said the curfew in Washington would be from 11:00 pm to 6:00 am instead of starting at 7:00 pm.

“People of power, privilege, and moral conscience must stand up and say ‘no more’ to a racially discriminatory police and justice system, immoral economic disparities between whites and blacks, and government actions that undermine our unified democracy,” the 95-year-old Carter said in a statement.

“We need a government as good as its people, and we are better than this.”