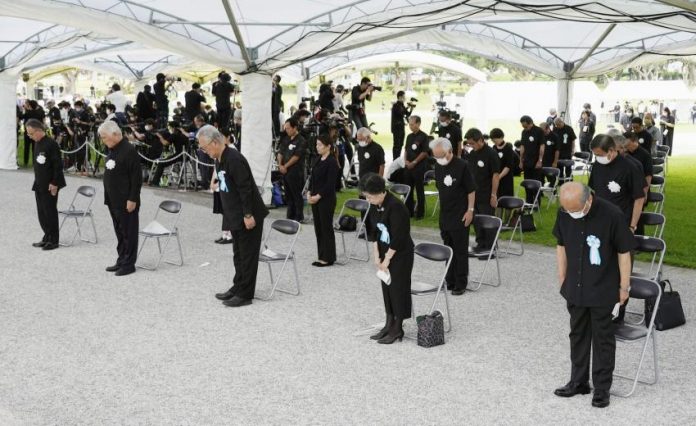 Amid the ongoing COVID-19 pandemic, Japan on Tuesday commemorated the 75th anniversary of the end of the Battle of Okinawa, which killed 200,000 people, half of them civilians.

The annual ceremony was held at the Peace Memorial Park in Itoman where the Battle of Okinawa between the US and Japan ended in 1945, and only those living in the prefecture were able to attend due to the pandemic, reports Efe news.

Prime Minister Shinzo Abe, the mayors of the cities of Hiroshima and Nagasaki and a UN representative were also scheduled to attend the event but restrictions imposed in the country to prevent the spread of COVID-19 meant that they could only be present through video messages sent for the occasion.

The Battle of Okinawa was the only ground invasion of the Japanese mainland by the US during World War II and it took place months before Japan surrendered following the atomic bombings of Hiroshima and Nagasaki.

The bloody battle lasted three months and killed one out of every four Okinawa citizens, around 94,000 in total.

Okinawa authorities usually use the anniversary as an opportunity to underscore the burden on the small archipelago, which is home to around 75 per cent of the military facilities in Japan.

Military bases, which occupy one-fifth of the area of the main island, were built on land expropriated during the American occupation, which lasted until 1972, two decades longer than in the rest of the Asian country.

Abe’s administration has made plans to relocate one of the biggest US bases in the area to Nago city in Henoko Bay, in a less populated area, but also within Okinawa prefecture.

Okinawa authorities took the case to several courts to try to overturn the project with legal arguments based on on the grounds that it posed a threat to the area’s environment and might prove to be detrimental to the local population, but Japan’s Supreme Court ruled in Tokyo’s favor in 2016.

A majority of citizens of Okinawa are opposed to the relocation of the Futenma base from its present location and have asked that it be moved outside its territory.

The political bloc opposed to the relocation retained a majority in the prefectural assembly elections held earlier this month.