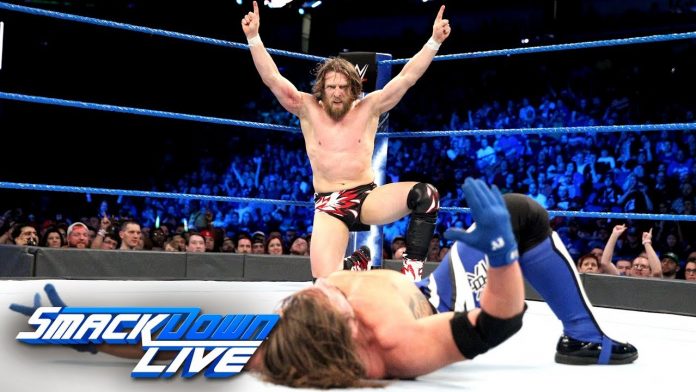 Renee Young introduces us to a contract signing that will take place between Sheamus and Jeff Hardy. Sheamus comes out first, and he’ s with a physician and security personnel carrying a box.

Sheamus is asked about the box and he says that Jeff can’t be trusted and that before he signs the contract, he needs some assurances. So therefore, Hardy needs to pass a urine test. Jeff Hardy says his name and that he is an alcoholic. He says he’ll do what he has to do and he’s tired of fighting this.

Jeff says he is an alcoholic and if this is what he has to do to get to Sheamus, fine. He’s been battling alcohol and addiction since his early 20s, and he’s tired of fighting. He goes to meetings each week and talks about how he’s let everyone down. He’s sick and tired of being sick and tired. His demons are starving and sometimes all it takes to want to feed them is being in the presence of a bastard like Sheamus but not this time, he’s going to be a beacon of light for everyone else who experiences something like this. Jeff goes on about what he’s going to do to Sheamus. Sheamus says his doctor will be able to speed up the test which usually takes 24 hours, and he will pay for the test on his own. Sheamus says his doctor is even overseeing the test.

Sheamus asks Renee to leave the ring because Jeff is experiencing performance issues. Jeff steps inside of the curtain that Sheamus had brought out. The doctor steps in with him. Sheamus knocks Hardy while he apparently urinates in a cup. They step back out with a glass full of urine. Sheamus jokes that Hardy had fun at Happy Hour. Sheamus continues to taunt Hardy as the doctor tests the urine. Jeff ends up grabbing the urine and throwing it in Sheamus’ face. Jeff exits the ring while Sheamus stumbles back, covered in urine. Sheamus is furious. We see Sheamus’ doctor heading to the back. Sheamus flips the contract signing table over in the ring and fumes as security looks on. The crowd chants “you got pissed on!” as Jeff watches from the ramp. Jeff’s music starts back up as we go to commercial.

Sheamus is washing himself backstage and gargling mouthwash backstage. The physician tells Sheamus Hardy’s urine test came back negative. Sheamus continues to wash himself off profusely.

New Day come out and during their entrance, they kneel and raise their fists.

The New Day vs. Shinsuke Nakamura and Cesaro

Shinsuke Nakamura rolls up Kofi for the win.

Heavy Machinery is backstage and Tucker says Otis is going to need all of his senses in his tag team match tonight. Mandy comes by and gives him a kiss. Rose wishes Otis good luck and gives another kiss, and Tucker says tonight could potentially be his night if Braun is distracted. They are cut off by Sheamus and Hardy brawling. D-Von Dudley breaks things up.

A promo hypes up the Daniel Bryan/AJ Styles match.

Greg Hamilton delivered in-ring introductions for the title match. Charles Robinson was the referee. Bryan performed a suicide dive on Styles at 1:50 and they went to a break.

Both men ended up at ringside and Styles was run into the ring post. Bryan stomped on the left arm of Styles and then targeted it once they returned to the ring. Bryan applied a hammerlock and then rolled Styles into a pin for a two count. Styles rolled onto the apron to regroup while Cole questioned how much he had left. Bryan charged Styles in the corner. Styles moved and Bryan crashed into the corner.

Styles went to work on the left leg of Bryan, who caught him with a step-up enzuigiri. Styles came right back and set up for a Phenomenal Forearm, but Bryan cut him off and then threw repeated kicks in the corner. Bryan placed Styles on the ropes and then performed a huracanrana.

Bryan threw a series of kicks at Styles, who ducked the last one and fired off a series of strikes. Bryan avoided one, but Styles turned him inside out with a clothesline. Both men were down in the middle of the ring at 22:20.

Bryan sent Styles to ringside and then went for a suicide dive, but Styles caught him with a kick. Back inside the ring, Bryan applied an armbar. Styles countered into a Calf Crusher. Bryan escaped and reapplied the armbar. Styles powered out, but Bryan got to his feet first kicked Styles, then followed up with a big kick to the head, which led to a near fall.

Styles was placed on the top rope. Bryan went up behind him and was hit with elbows until he fell back into the ring. Bryan got his feet and hit Styles from behind with a forearm, then went to the ropes again. Styles fired away with more elbows to the head and knocked Bryan back into the ring again. Bryan got up and hit Styles from behind again, then pounded on his back repeatedly. Bryan performed a back suplex from the ropes and both men were down at 29:20.

Styles connected with a Pele Kick and then performed a brainbuster for a near fall. Bryan caught the foot of Styles when he went for another Pele Kick and then suplexed him. Styles responded with a Pele Kick of his own. Bryan performed a German suplex into a bridge for a two count. Bryan followed up with several elbows to the head and then applied a Yes Lock, but Styles reached the ropes with his foot to break it at 36:05.

Bryan grabbed Styles’ arms and delivered several kicks to the head. Bryan went for a running knee, but Styles caught him and performed a Styles Clash. Both men were down and Graves said Styles didn’t have enough gas left in the tank to make the cover. Styles followed up with a Phenomenal Forearm and scored the pin.

Match Review ***** It is a 5 star match. Damn the best match of 2020 and a Match of the year candidate. The pacing was brilliant, I loved the way Daniel Bryan kept coming back and nearly won with the YES Lock but AJ Styles found a way to deliver a Phenomenal Forearm to score the pin. This is a must watch match for every pro-wrestling fan.

After the match, AJ says he’s the best WWE Champion that the WWE universe has ever seen and that he is phenomenal.

We get a recap of Miz and Morrison’s hijinks last week.

Braun says nothing will fix what will happen to Miz and Morrison this Sunday at Backlash and he warns Otis not to try anything funny tonight, because he has no problem obliterating Heavy Machinery.

Bayley and Sasha Banks come out to celebrate their newly won tag titles.

Bayley says it’s lonely at the top since she’s beaten everyone. Sasha says the titles represent their friendship, and together, they are unstoppable. Bayley reveals that she wrote a poem about Sasha, but before she can read, Alexa Bliss and Nikki Cross interrupt.

Alexa says when you start reciting poetry to each other, that crosses the line. Nikki and Alexa say they love a good party. The IIconics interrupt from the titantron, and they say Sasha and Bayley’s time as champs will end. The IIconics remind both teams they won both and they warn Sasha and Bayley not to turn their backs, and they can sent out of the ring by Alexa and Nikki.

Braun Strowman and Heavy Machinery vs. The Miz, John Morrison and Dolph Ziggler

During the match, King Corbin appears on the screen and asks Mandy about last week and whether or not she was behind Otis stealing his crown. Mandy says no. Corbin says what this really is about is Corbin fantasizing about being with a man with stature, and not someone like Otis. Otis runs backstage and attacks Corbin.

Otis returns and hits the catepillar and jumping elbow on Ziggler for the win.

TOP Three stars of the show