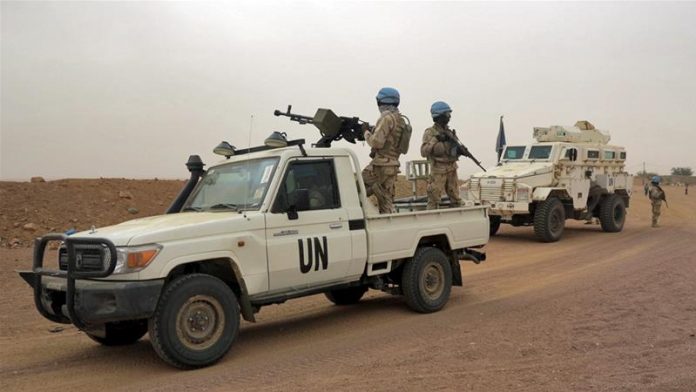 The United Nations Multidimensional Integrated Stabilization Mission in Mali (MINUSMA) confirmed this Sunday that two of its peacekeepers were killed Saturday evening during an operation in norther Mali.

According to a press release of the MINUSMA, unidentified armed individuals attacked the the UN mission convoy near Tarkint, norther region of Gao, around 7 p.m. on Saturday. Two peacekeepers lost their lives.

Mahamat Saleh Annadif, special representative of the UN secretary-general for Mali and head of the MINUSMA, strongly condemned these cowardly acts aiming to paralyze the MINUSMA’s operations on the ground, according to the press release.

“We will have to combine all efforts to identify and apprehend those responsible for these terrorist acts, so that they can answer for their crimes in front of justice,” Annadif concluded.

United Nations Secretary-General Antonio Guterres on Thursday stressed the need for continued international commitment to Mali, as the country continues to navigate the path to political stability while confronting numerous obstacles including terrorism and the COVID-19 pandemic.

“Building a politically stable and more secure Mali requires our collective and sustained commitment and MINUSMA’s continued support. We owe this to the people of Mali and the Sahel region, who deserve a better future,” Guterres told ministers and ambassadors attending the meeting.

The MINUSMA was deployed in 2013 to support political processes in Mali. During a failed coup in 2012, extremist militias took control of Mali’s north. A UN-backed peace deal in 2015 between the government and various armed groups failed to stabilize the situation in the country’s central and northern regions, with attacks multiplying in the past years.