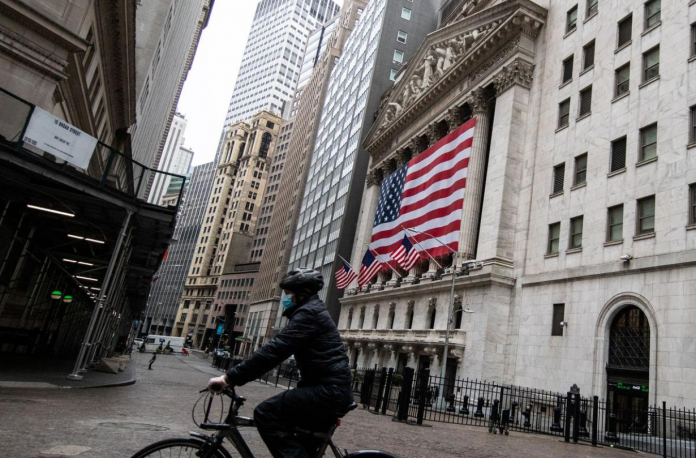 Oil prices slid and world equity markets seesawed on Wednesday as investor hopes for a pickup in business activity were dashed by downbeat economic data and a rise in U.S. crude stockpiles to three-year highs that highlighted low fuel demand.

Retail sales in the euro zone also suffered their largest decline on record in March.

Demand has collapsed globally as the coronavirus epidemic has resulted in massive lockdowns, and many investors see the prospect of a swift recovery as difficult, even as the gradual opening of economies worldwide has given hope to others.

Trying to gauge economic growth in light of the pandemic has sent investors searching for new insights, especially in China as its economy was first to reopen, said Yousef Abbasi, global market strategist at INTL FCStone Financial Inc in New York.

Technology stocks perceived to be resilient to a changing economic and work environment led gainers on Wall Street.

“The leadership has come from stocks that benefit from stay-at-home economy,” said Jack Janasiewicz, portfolio strategist at Natixis Investment Managers.

The pan-European STOXX 600 index closed down 0.35% while MSCI’s gauge of stocks across the globe rose 0.1%.

General Motors Co (GM.N) jumped 4.7% after the automaker topped profit expectations and outlined plans for a May 18 restart of most of its North American plants.

Oil slid below $30 a barrel as crude stocks rose and gasoline demand remained below normal seasonal levels, snapping a six-day winning streak for Brent futures that helped the global benchmark almost double in price from a 21-year low on April 22.

U.S. crude inventories rose by 4.6 million barrels in the week to May 1, to 532.2 million barrels, compared with analysts’ expectations in a Reuters poll for a 7.8 million-barrel rise.

“Earnings season is not great, but it’s really the issue of the virus and the end of the lockdown, and sentiment towards that will push the market,” said Francois Savary, chief investment officer at Swiss wealth manager Prime Partners.

China opened for the first time since Thursday, following a week-long holiday, and reversed early losses, sending its blue-chip index .CSI300 up 0.6%.

In a move seen by analysts as offering a olive branch to Washington amid bilateral trade tensions, China’s central bank set the yuan at a broadly neutral midpoint. The exchange rate has been a contentious point in China-U.S. ties.

Yields on longer-dated U.S. government debt jumped to three-week highs and the yield curve steepened after the Treasury Department sharply increased the size of its auctions as it grapples with financing a rapidly expanding deficit.

The department said it expects to borrow $2.999 trillion during the April-June quarter, five times more than the previous single-quarter record set during the 2008 financial crisis.