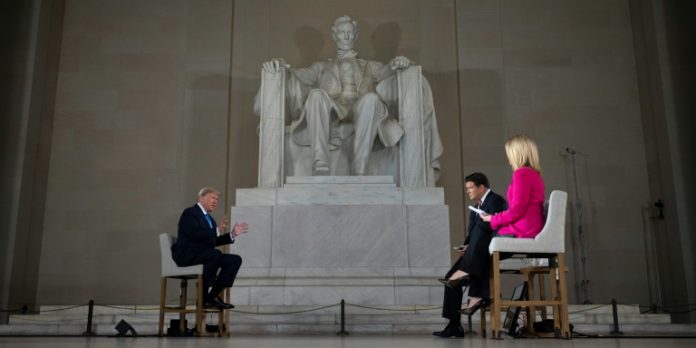 President Donald Trump relaunched his election campaign Sunday with a live television event inside the iconic Lincoln Memorial, promising an early coronavirus vaccine and urging Americans to put the pandemic behind them to embrace an “incredible” future.

With the two-hour long Fox News “town hall,” Trump sought to wrap himself in the mantle of America’s arguably greatest president — and to persuade a nation battered by death and mass unemployment to look ahead.

“We can’t stay closed as a country, we’re not going to have a country left,” he said on the show, where two moderators, as well as ordinary citizens via video, put questions to him in front of the monument.

“We’re going to have an incredible following year,” he said.

To a woman who called in expressing fear of financial ruin and eviction, Trump said her job would come back.

“You get a job where you make more money,” he said.

Saying Americans should start going back to beaches this summer and recommending that shuttered schools need to reopen in September, Trump forecast good news on the hunt for a vaccine.

“We are very confident that we’re going to have a vaccine… by the end of the year,” he said, admitting he was getting ahead of his own advisors with the prediction. “I’ll say what I think,” he said.

The businessman Republican is doing poorly in most polls ahead of the November presidential contest against Democratic challenger Joe Biden, who remains shuttered in his Delaware home.

US President Donald Trump looks to declare victory, reopen the economy, and move on to his reelection campaign

Trump faces criticism for his bruising, divisive style during a time of national calamity. He is also accused by some of botching the early response to the COVID-19 virus.

Worse, the previously booming US economy, which was seen as a golden ticket to his second term, is now in dire straits due to the nationwide lockdown.

With officials saying the viral spread has begun to taper, Trump is itching to return to the campaign trail.

However he faces new criticism that he is trying to declare premature victory, even as the illness continues to kill thousands of Americans every week.

Having repeatedly minimized the death toll, claiming it will end at around 60,000, Trump conceded that now “I’m saying 80 or 90 and it goes up.”

His emphasis, however, was not on the dead, but on resurrecting his image as a can-do leader who can end the skyrocketing unemployment caused by the lockdown.

That audacious shift began Sunday at possibly the most hallowed monument in the country — the statue of Abraham Lincoln, who led the country through civil war, urged reconciliation, and was assassinated in his moment of triumph.

Trump, who calls himself a “wartime president” denied that the election will turn into a referendum on his handling of the crisis.

But he added: “I hope it does because we’ve done a great job.”

The US Navy Blue Angels and US Air Force Thunderbirds fly over Washington, DC

In the next few days, Trump will follow up by breaking months of self-quarantine with long-distance trips to the key electoral states of Arizona and Ohio.

It’s a play that will emphasize Trump’s massive visibility advantage over Biden and, the White House hopes, rewrite the public relations script after gaffes including the president’s suggestion that coronavirus patients ingest disinfectant.

Many consider Abraham Lincoln the greatest US president

Lincoln gambled in 1861 that only war could preserve the United States by ending slavery and restoring the nation’s ideals of freedom. He won, becoming a national hero.

But Lincoln is remembered as much for reaching out to former foes — something Trump did not seek to emulate as he spoke at the foot of the iconic statue.

Previous presidents, he said, were “stupid” to allow reliance on foreign manufacturers for US medicines.

The Democrats, he said, are “radical,” claiming they would prefer to see people get sick than see him succeed.

Trump pronounced that he had “done more than any president in the history our our country in the first three years.”

His self-declared greatness is questioned by many Americans.

Trump even got in an online tussle with former president George W. Bush earlier Sunday, after the fellow Republican posted a video filled with the kind of empathy and solidarity that many accuse the current White House occupant of failing to show.

Trump responded by complaining that Bush was “nowhere to be found” when he was battling off an impeachment attempt in Congress last year.