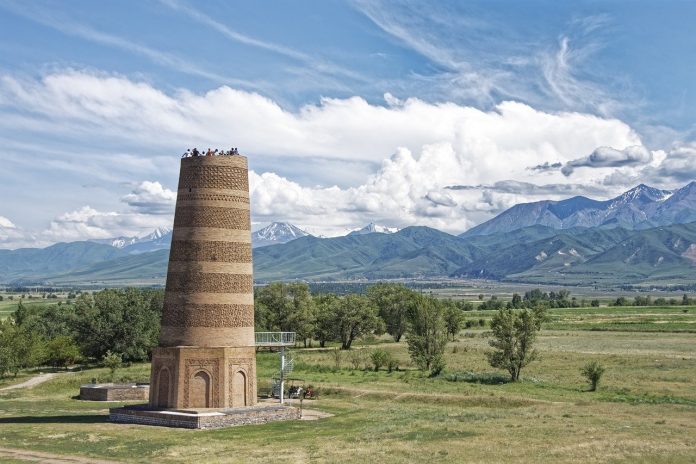 Kyrgyzstan, officially the Kyrgyz Republic and also known as Kirghizia, is a country in Central Asia. Kyrgyzstan is a landlocked country with mountainous terrain. It is bordered by Kazakhstan to the north, Uzbekistan to the west and southwest, Tajikistan to the southwest and China to the east

The barren, hot, and ruined fields of the Kyrgyz Republic used to be a sleepy back border of the Soviet Union. Now, it is the best-kept secret for travelers and tourism. Kyrgyzstan has become a spirited nation that is no longer defined by dominating powers National tourist promotions state Kyrgyzstan means “40 towns”, but locals recommend it to be not so. Kyrgyzstan from the sound of its name elicits a hypothesis of a mysterious and dark place foreign to the world for the most part, but the name which means “eternal” or “durable” suggests an interesting culture that would name its nation such. Kyrgyzstan has the most liberal tourist visa policies in Central Asia and an economy to meet Kazakhstan’s prowess.

Kyrgyzstan (42 52 N, 74 36 E) is a hilly region dominated by the Tien Shan range, which in Kyrgyz means “Celestial mountains”. The traveler will find wild and rugged snow-capped mountains. With 93% of the region mountainous, the nation is a pleasant place to be for nature-lovers. The republic is also a site for icebergs and high altitude lakes, the highest point being Jengish Chokusu at a height of 7,439 meters which is beautiful for hiking. The lowest point is 132 meters above sea level, the Kara Darya. The climate is dry continental to polar in Tien Shan, temperate in the northern foothill zone, and subtropical in the southwest, at Fergana Valley.

Of around 6 million Kyrgyztanis, the Kyrgyz (Turkic group) comprises a fat demographic of around 70% of the population. Uzbeks (14.5%) are concentrated in the south, and the Russians (9%), in the north. The sizeable minority of Russians in the region demonstrates the culture that remains and, also Russian as the official language. KYRGYZ, on the other hand, is the voice of the state used in the parliament and at home. English is spoken for its assumed weight and has been given the spotlight in education since the 1960s. Kyrgyzstan is largely Islamic with 76% of the country as Muslims, while Russian Orthodox followers have a significant population of 20%. As a semi-nomadic society, agriculture is an important sector of the republic where livestock is the most extensive agricultural activity.

The charm of Kyrgyzstan depends on its nature. The striking beauty of Kyrgyzstan appeals to the traveler who mostly loves the outdoors. Song-kul’s naive life amongst the grandiose of its pristine pastures and Lake Izzyk-kul’s versatility for sailing, surfing, boating, scuba diving, and fishing are the main attractions of Kyrgyzstan. Izzyk translates to “hot” because it is the lake that never freezes even in winter seasons. Hiking is brilliant in the hills around this lake. What a sight! The best part about Kyrgyzstan, there is no traffic. The rationale: public transport is a developing theory in these parts. The people of Kyrgyzstan make travel even more worthwhile with their naturally generous and courteous nature, so a traveler should know when planning to stay with a Kyrgyzstani family. Hospitality is uber important to the Kyrgyz people, which is why the Kyrgyzstanis generously host their guests to a point where they will give you anything and everything they have.