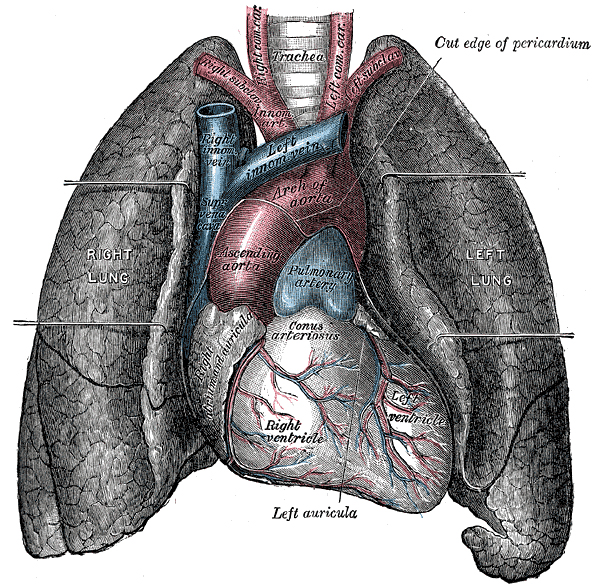 The lungs are the principal organs of the respiratory system in humans and many other animals including several fishes and some snails. In mammals and most other vertebrates, two lungs are positioned near the backbone on each side of the heart. Their role in the respiratory system is to extract oxygen from the air and transfer it into the bloodstream, and to release carbon dioxide from the bloodstream into the air, in a method of gas exchange. Respiration is stimulated by different muscular systems in different species. Mammals, reptiles, and birds use their separate muscles to strengthen and encourage breathing.

In humans, the main tissue of respiration that drives breathing is the diaphragm. The lungs also present airflow that makes vocal sounds including human speech feasible.

Humans, as we all know, have two lungs. They are located within the thoracic cavity of the chest. The right lung is slightly larger than the left, which shares space in the chest with the heart. The lungs collectively weigh approximately 1.3 kilograms (2.9 lb). The lungs are part of the lower respiratory tract that starts at the trachea and branches into the bronchi and bronchioles, and which collect air breathed in via the conducting zone. The conducting zone ends at the terminal bronchioles. These divide into the respiratory bronchioles of the respiratory zone which split into alveolar ducts that give rise to the alveolar sacs that contain the alveoli, where gas transfer takes place. Alveoli are also sparsely present on the walls of the respiratory bronchioles and alveolar ducts. Together, the lungs contain about 2,400 kilometers (1,500 mi) of airways and 300 to 500 million alveoli. Each lung is confined within a pleural sac that contains pleural fluid, which allows the inner and outer walls to slide over each other whilst breathing takes place, without much friction. This sac also divides each lung into sections called lobes. The right lung has three lobes and the left has two. The lobes are additionally divided into bronchopulmonary segments and pulmonary lobules. The lungs have a unique blood supply, drawing deoxygenated blood from the heart in the pulmonary circulation for the purposes of receiving oxygen and releasing carbon dioxide, and a separate accumulation of oxygenated blood to the tissue of the lungs, in the bronchial transmission.

But how exactly lungs evolved? Let’s find out.

The lungs of today’s earthly vertebrates and the gas bladders of today’s fish are thought to have evolved from simple sacs, as out pocketing of the esophagus, that enabled early fish to gulp air under oxygen-poor conditions. These out pocketing first appeared in the bony fish. In most of the ray-finned fish, the sacs evolved into closed-off gas bladders, while a number of carp, trout, herring, catfish, and eels have clutched the physostome condition with the sack being open to the esophagus. In more basal bony fish, such as the gar, bichir, bowfin, and the lobe-finned fish, the bladders have evolved to essentially function as lungs. The lobe-finned fish gave rise to the land-based tetrapods. Thus, the lungs of vertebrates are equivalent to the gas bladders of fish.