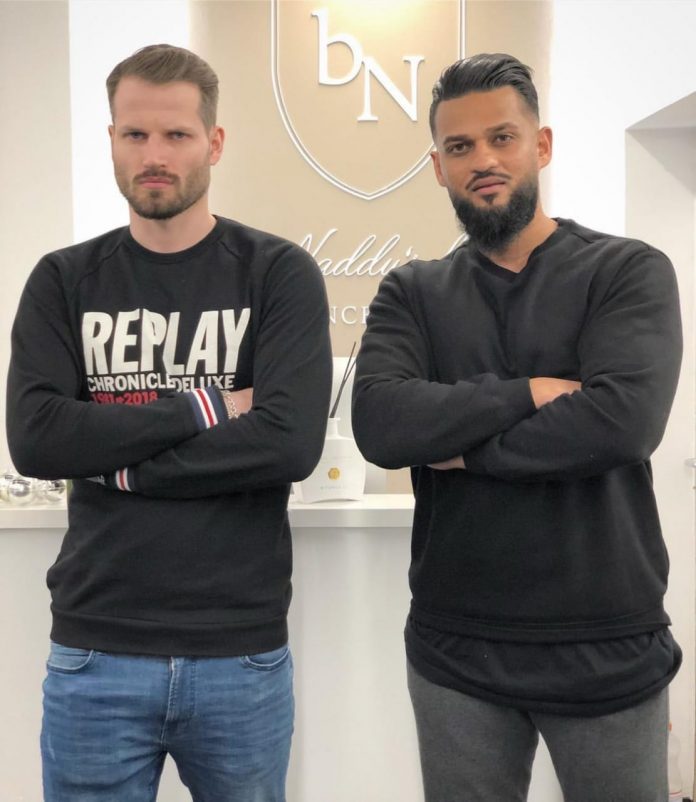 The Topmodel and his celebrity hairdresser Adwin “Sonu“ Akhtar. After the lockdown in Germany the Topmodel David Koch is at his favorite hairdresser place @bynaddys.
For six weeks, the famous hairdresser salon by Naddy’s Hair, had to close due to the “corona crisis”. At the beginning of May, the prominent customers like “David Koch” finally got the good news: the salon is open again!

Ardent David Koch’s keenness for lunging toward his dreams:

“Optimism is the faith that leads to achievement”

Yeah! You heard it right!

A positive attitude and thinking can lead us to conquer wonders in life.

A young lad David Koch is that role model and a protagonist for many chasers who are continuing in the chain.

This youth idol David Koch used to be once in earnest for modelling in the month of May of 2011 in his urban centre Frankfurt, a city in Germany. In no meantime, right after two weeks next, being the fortunate one on the couch, he runs at the famed Fashion week in the city of love- Paris. He worked there for the renowned fashion designer “Thierry Mugler”. Straight after he got summoned by Jil Sander in Milan.

In the world of fashion, Koch was becoming a gloriously refined man. The famous fabled companies of the fashion world started off picking him as their first choice. Barely a week later, this prodigy was running for the utmost fashion homes- Calvin Klein and Giorgio Armani.

Let’s move engrossingly to catch a glimpse on his pursuit- Koch shifted to Milan and after a while, he chose Paris to dwell upon for the augmentation of his network and to get acquainted with the feasible clients. Koch was getting into marvellous deals. One such victorious assignment Koch has done is – he was designated by the world-famous and exquisite photographer “Steven Klein” in New York for the current campaign of diesel.

Overwhelmed by his own accomplishments he decided to switch to his second next dwelling-place, New York in the identical 12 months.

Koch was swapping in between Germany and the USA till 2018 for filling up all enquiries. There he has done the utmost affairs with “Ysl”, ” Dior” and “Calvin Klein”.

Koch was longing for success and wanted to plot himself everywhere. He was resolutely intent toward his aim. So, in the year 2018, he decided to move to Paris once again to show off an increased appearance in the regional fashion scene.

They say when you really desire something from the heart and soul, all the universe conspires you to achieve it. In July of 2019, David Koch made his way to make an appearance on the cover of “ Vogue Italia”. The editorials started flooding off from the name of the supermodel- “David Koch”. Another in the list is, he got to shoot for the current campaign of Givenchy in the iciness months of November and December. Again he rocked at the covers and in the editorials of the Mexican GQ and the US ” Harper’s Bazaar”.

By the end of the decade, in 2020, he has succeeded in blowing up the folk’s mind by announcing the news of launching his own fashion brand “David Koch Styles”. He has also been appointed as the top charge sponsor of the ” German Bundesliga club “Remscheider TV JUDO TEAM”. Moreover, Koch is also an ambassador for the world-class ‘Panasonic’ brand. This year he is rocking as becoming the face for the – Emporio Armani underwear campaign.

Being a toast of the town, David Koch is currently residing in Duesseldorf and sharing his loving moments with a beautiful and stunning blonde woman.

David Koch is one of the booming, renowned and a household word who is an idol for many. He has been inspiring the vernal young’s since the bunch of years and surely he keeps on influencing the one’s ranking in the range.

So, keep your eyes peeled by the motivation that has been bringing by this stripling personality