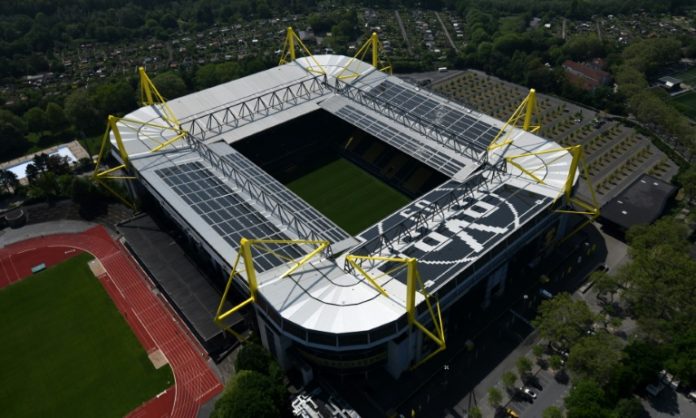 The Bundesliga returns on Saturday in empty stadiums, but German fans are being warned to stay away and authorities have warned matches could be halted if too many supporters gather outside the grounds.

German football will be blazing a trail among Europe’s top leagues by resuming two months after it was halted by the spread of coronavirus, but its strategy is fraught with risks.

In a football-mad country which boasts the highest average attendances in the world, will supporters banished from stadiums be able to stay away?

“Fans must not use matches behind closed doors as an excuse to gather in front of the stadiums or elsewhere,” he said.

“This could lead to matches being stopped.”

His concerns are justified.

Several hundred fans gathered in Moenchengladbach when the hosts beat 2-1 Cologne on March 11 — the only previous German league game played behind locked doors, just days before the shutdown.

Eintracht Frankfurt have appealed to their supporters before they resume their season against ‘Gladbach on Saturday.

Under German league rules put in place to resume the season, the home side is responsible for ensuring fans do not try to approach the stadium to support their team from a distance.

After weeks of meticulous planning and mass testing of players and backroom staff, it would be a nightmare for the Bundesliga if the fans were to derail the fragile recovery attempt.

Christian Seifert, CEO of the Bundesliga, does not expect fans to play into the hands of critics who fear they will mass outside grounds despite large public events being banned in Germany.

Seifert accused the critics predicting that football fans would fail to respect the pleas for restraint of making “sweeping statements”.

“I don’t believe that the fan scene and the fan organisations will do their critics… the favour of behaving in exactly the way” that those doomsayers fear, he said.

The Bundesliga boss said all the talks he had held on the issue “do not give any indication” that supporters will gather.

Broadcaster Sky has agreed to show some of Saturday’s matches on a free-to-air channel, allaying fears that fans will gather in bars or public places which have a subscription for the pay-per-view service.

However, Seifert says while they are taking every reasonable step to discourage fans from meeting up, “the DFL’s responsibility ends at a certain point”.

The centrepiece of Saturday’s return to action is Borussia Dortmund at home to Schalke in the Ruhr derby, a match which would usually draw a crowd of 82,000 to Signal Iduna Park.

Instead, it will be the first time this fixture is played behind closed doors since it began in 1925.

There are fears in the German football scene that the ‘Ultras’ — hardcore fans who often lead the chanting at matches — will lose their hard-earned influence at their clubs.

Some groups of these hardcore supporters are opposed to games being played in empty stadiums, because they feel the initiative is driven by financial reasons.

The clubs are eager to finish the league season before June 30 in order to collect around 300 million euros ($324 million) due from TV contracts.

Helen Breit from the nationwide football supporters group “Unsere Kurve” (Our Curve) said she refused to watch a single match without fans on television.

“For me, football is in the stadiums,” she told Munich-based paper Sueddeutsche Zeitung.

“I’ve been going to almost every Freiburg match for more than ten years and watching football on TV is not an option for me.”

Another group feels the resumption of football during a pandemic, which has claimed 7,500 lives in Germany, shows how “sick” professional football has become.

Borussia Moenchegladbach supporters can appear as cardboard cutouts at their stadium

“A continuation of the season would be sheer mockery of the rest of society,” Ultras groups across Germany said in a joint statement last month.

“Professional football is sick enough and should remain in quarantine.”

But for the vast majority of fans, the decision to play the nine remaining round of matches behind closed doors makes the best of a bad situation.

Even if the fans cannot be in the stands in person, Moenchengladbach have found a novel way of allowing them to be seen by the players — for 19 euros ($21), Gladbach fans can buy a cardboard cut-out of themselves which will be placed on the terraces of Borussia Stadium.