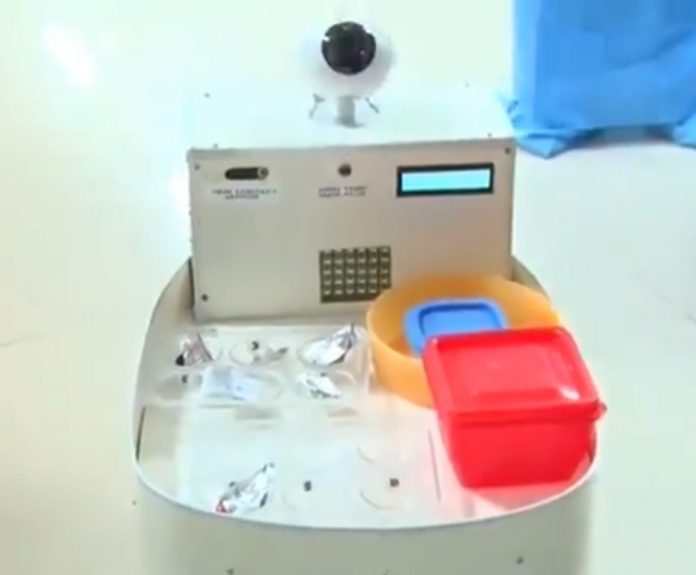 The robotic device, christened “RAIL BOT” (R-BOT) has been developed by Hem Singh Banoth, Additional Divisional Railway Manager, Hyderabad Division, SCR and his team. it has undergone extensive trials and demonstration before its use at the Central Railway Hospital, Secunderabad.

R-BOT is being used to provide medicines, medical accessories, and to serve food to the patients, taking away the need for human contact in such activities.

As a result, doctors, nurses and other support medical staff are better placed to stay away from the risks of contacting infections.

The R-BOT is operated through a unique mobile application, and supported by Wi-Fi facility. Using sensor-based features, the robot can read the body temperature of patients, and transmit it for display on a mobile phone.

It is also capable of raising an alarm in case of any abnormally high body temperature readings to alert medics attending to the patients.

The R-BOT is equipped with a real-time video camera that has pan &amp; tilt functions. The robot also performs as a two-way audio and video communication with recording facility, helping in a smooth interaction between patients and doctors.

It uses infra-red technology with emergency night lamp &amp; night vision to enable communication even in complete darkness. It can circumvent any foreign objects in its path with the help of inbuilt observation avoidance sensors.

Moving at a speed of 1 kmph and a load-carrying capacity of 80 kg, the R-Bot is capable of continuously functioning for six hours on a single charge of battery.

SCR officials said that plans are afoot to further innovate and develop the R-BOT, in terms of optimal functional efficiency, which can lead to more widespread use of the device at the medical facilities in the railway zone.