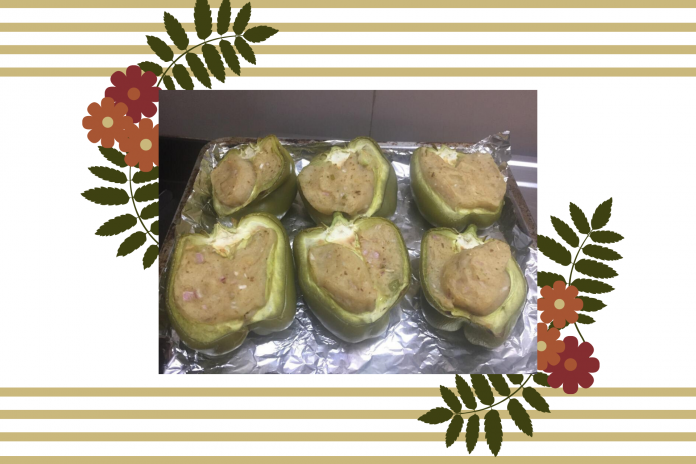 In the days when capsicum was not BELL PEPPER and it was neither red nor yellow, only green, mum used to cook it with potatoes. A simple dish which killed the capsicum’s bite totally. It was not something that I missed at all but managed to chew and swallow to cure hunger pangs. What I really liked was my mum’s excellent salad of capsicum cut into long slim juliennes, dipped and rested in lemon juice. Making that needed a heavy dose of labour of love.

When I moved out of my parent’s house, I never made the effort to buy capsicums to cook – making that salad which needed some patience was out of question – though I did come to enjoy red and yellow BELL PEPPERS in salads and oriental preparations at other people’s homes or in restaurants. Soon enough I ended up marrying a man who hated capsicums with all his might and the only way he could think of them being edible was if they were stuffed with potatoes. S wasn’t interested in cooking at all. I was busy with work. We had a healthy turnover of cooks, none of who were interested in cooking beyond a regular simple meal – stuffed dishes were not on their list. Capsicums fell off our cooking shelf rather quickly.

Two decades later, with our now pre-teen and eminently creative daughter showing interest in capsicums, I decided to make the stuffed version. She really enjoyed it – in hindsight I think what fascinated her more than the taste itself was the idea that one could cook a vegetable by stuffing it with another. It tickled her creative buds more than anything else. Bereft of my creative gene since birth, it took me some time to figure this out.

While I may be lacking in creativity, these genetic accidents haven’t deprived me of the lethargy material in my DNA – how am I to blame for that? I researched hard – hanging my lethargy in the cupboard for that brief period – looking for a less careful and exhausting method of cooking stuffed capsicums. Learning from different versions I devised this process, cutting out effort from all corners, retaining only the most essential parts. No frying of onions to mix them with mashed potatoes, no cooking of onion-tomato-garlic-ginger masala for the stuffing, and no shallow frying of stuffed capsicums which requires frequent stirring.

I cook 3 big or 4 medium capsicums at one time, between the daughter and father they cover for at least two meals. If like me you enjoy the mashed mix without the capsicum, save some from the stuffing. It goes really well with steamed rice, I can have it just like that too. Now go back to being your lazy self!