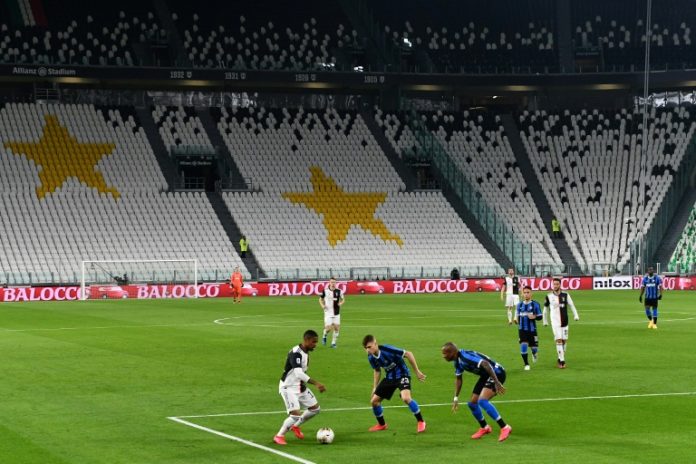 Serie A hopes of following Germany and Spain back onto the pitch will be decided on Thursday during a meeting with the Italian government which will determine the fate of the season in football-mad Italy.

Sports Minister Vincenzo Spadafora will tell Italian football federation and Lega Serie A bosses if the health conditions are right to return after nearly three months.

The Italian season has been on hold since March 9 amid the coronavirus pandemic which has killed almost 33,000 people in the country.

Football clubs returned to group training on May 19 but competitive action remains suspended until mid-June.

Indications are that Spadafora and the government’s Scientific Technical Committee will agree to both the health protocol proposed and to start the season again.

In the case of a favourable decision on Thursday, Lega Serie A have scheduled a meeting for Friday morning to examine “the different calendar hypotheses” for the remaining Serie A and Italian Cup matches.

They hope the season would resume fully on June 20, with the goal of awarding the league title, defining promotions and relegations, before playing Italian Cup semi-finals, with the final in early August.

The closing stages of the European club competitions could also be played in August. Three Italian clubs are still in the Champions League and two in the Europa League

But not everyone agrees with a return to the pitch and the packed schedule required with teams needing to play three matches a week, in hot summer conditions.

Brescia and Torino, situated in the northern regions of Lombardy and Piedmont respectively, which accounted for nearly 60 percent of Italy’s COVID19 deaths, have consistently opposed to a return.

“To finish this championship is forcing it in my opinion,” Brescia captain Daniele Gastaldello said this week.

“It’s risking the safety of the players.”

Brescia are sitting last in the league, and have nothing to gain by concluding this nightmare season.

“I bow to the majority choice,” said Cairo, voicing his concerns over “the short time between the end of this season and the start of the next one,” scheduled for September 1.

AC Milan’s Swedish froward Zlatan Ibrahimovic, one of the big stars of the championship, has already suffered a calf injury in training, and could be out for a month.

“If I were to speak only as a coach, I would prefer it to stop and start calmly next season.

“There is going to be an endless series of matches and I don’t know what state the players will be in.”

On Friday, the ‘Plan B’ will also be analysed at the Lega Serie A meeting, a format with short playoffs to determine the title, European places and relegation, if the season is again suspended, or all the matches not played.

Another issue to be solved is that of players’ contracts and whether they can be extended to complete the season beyond its natural expiration.

The issue of wage cuts also remains unresolved and liability in the event of illness remains complex.

But one team who have been anxious to return to the pitch are Lazio.

The Roman club were just one point behind leaders Juventus when the season was suspended, and within touching distance of the third Scudetto in the club’s 120-year history.

“We miss football, I don’t speak only for myself or for our team. We hope that the right decision can be made soon to complete this championship,” said captain Senad Lulic.