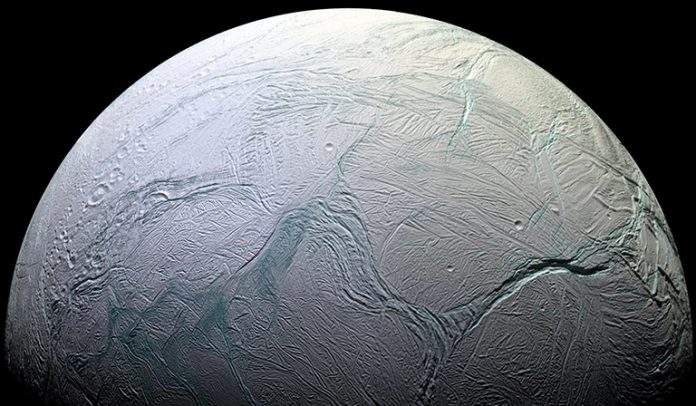 This is Part-4 of the series, ‘searching for home elsewhere.’ Part 3 explored Neptune’s darkness. Part 2 was a hopeful voyage with Jupiter’s Moon, Europa.

Part one explored Venus. Let’s look at the best alternative to earth today.

Enceladus is the sixth-largest moon of Saturn. It is about 500 kilometers (310 mi) in diameter, about a tenth of that of Saturn’s largest moon, Titan. Enceladus is essentially covered by fresh, clean ice, making it one of the most reflective bodies of the Solar System. Consequently, its surface temperature at noon only reaches −198 °C (−324 °F), far colder than a light-absorbing body would be. Despite its small size, Enceladus has a wide range of exterior features, ranging from old, densely cratered regions to young, tectonically distorted terrains.

Enceladus was first observed on August 28, 1789, by William Herschel, but little was known about it until the two Voyager spacecraft, Voyager 1 and Voyager 2, passed nearby in 1980 and 1981. In 2005, the Cassini spacecraft started multiple close flybys of Enceladus, exhibiting its surface and environment in more prominent detail. In particular, Cassini discovered water-rich plumes discharging from the south polar region. Cryovolcanoes near the south pole shoot geyser-like jets of water vapor, molecular hydrogen, other volatiles, and solid material, including sodium chloride crystals and ice particles, into space, totaling about 200 kg (440 lb) per second. Over 100 geysers have been classified. Some of the water vapor falls back as “snow”; the rest escapes, and supplies most of the material making up Saturn’s E ring. According to NASA scientists, the plumes are similar in proportion to comets. In 2014, NASA reported that Cassini found evidence for a large south polar subsurface ocean of liquid water with a thickness of around 10 km (6 mi).

These geyser observations, along with the finding of escaping internal heat and very few (if any) impact craters in the south polar region, show that Enceladus is currently geologically active. Like many other moons in the extensive systems of the giant planets, Enceladus is confined in an orbital resonance. Its resonance with Dione excites its orbital peculiarity, which is damped by tidal forces, tidally warming its interior and pushing the geological activity.

So, can we survive on Enceladus?

Unlike the cold and dark Neptune, Enceladus is an active celestial body with a lot of tectonic moments hidden under the icy surface. This is one of the most hopeful moons in our solar system which can host life. Tonnes of researches are going on even as we speak and yes, we can survive on Enceladus since we already know how to generate heat for a long time, and the necessary element, ‘water’ is available here. What about Oxygen? If there is water, there will be oxygen. Yup, this is a very likely candidate for colonization.