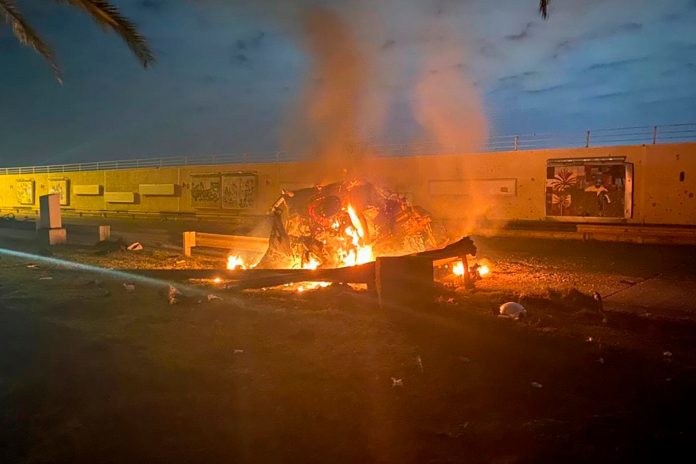 Three Katyusha rockets landed in the perimeter of Baghdad International Airport on Wednesday but caused no damage or casualties, the Iraqi military said.

There was no immediate claim of responsibility for the attack. Security officials said it was not immediately clear whether a military base hosting U.S. troops next to the airport was the target.

The United States blames a series of rocket attacks near or on bases hosting its troops this year on Iran-aligned militia groups, although those groups have not claimed them.

Tension between the United States and Iran has ramped up over the last year, culminating in the U.S. killing of Iranian military mastermind Qassem Soleimani and Iraq’s paramilitary chief Abu Mahdi al-Muhandis in a drone strike at Baghdad airport in January.

Iran-backed paramilitary groups vow to avenge their deaths and rocket attacks on bases hosting U.S. troops have persisted. Rocket attacks have also hit near the U.S. embassy in Baghdad, with at least one direct hit on the compound.

After Wednesday’s attack the military said it found a rocket launcher with a timer in a rural area in western Baghdad, and there were no reported damages or casualties.

The rockets were fired from the Bakriya neighbourhood, about 6 km (4 miles) northeast of the airport, and security forces were deployed to search the area, security sources said.

Iraq faces the COVID-19 pandemic, a looming economic crisis and increased security threats, including the U.S.-Iran standoff and a resurging Islamic State, without a sitting government.

IS has stepped up attacks this month including one that killed at least 10 paramilitaries in the northern province of Salahuddin, according to paramilitary and security statements.

The U.S.-led coalition that is in Iraq to fight Islamic State terrorists has begun to reduce troop numbers and moved soldiers into fewer bases. It says this is because Iraqi forces are now mostly able to fight IS remnants on their own.

Iraqi lawmakers are set to vote on a new government presented by Prime Minister-designate Mustafa al-Kadhimi later on Wednesday. It has been without a prime minister since Adel Abdul Mahdi, who remains in a caretaker capacity, resigned amid anti-government protests in November.