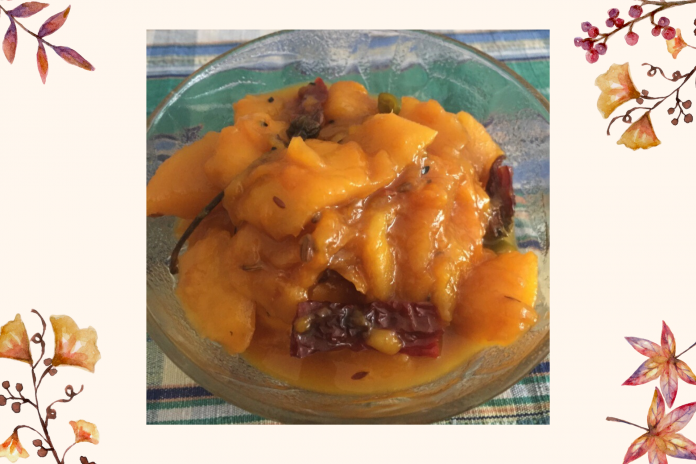 We faced a lot of difficulty in getting fresh fruit and vegetables as a result of a rather severe COVID-19 lockdown. As it continued through April with no clear signs of easing, my first thought was – are we going to get mangoes this season or not? Rumour was that they had already arrived in town but due to breakdown of the regular supply chain were sitting in the stores of fruit vendors. We started trying all overt as well as surreptitious ways of getting our hands on these mangoes. After shedding a few litres of sweat and some incredible cash we managed a cool dozen in the still of a dark, desolate, late evening. These were still only half ripe and heavy with the potential of sweet aroma and the distinctive royalty that belongs only to respectable mangoes. Having lovingly covered this fruit of toil in newspaper sheets to store in a quiet corner of the kitchen, several baited breaths in the house became audible. Significant time was lost each day in discussions on the length of time needed for ripening of these beautiful babies.

After 4 days of soaring expectations I rejoiced looking at the 2 yellow-orange fruit pieces. I washed them, cooled them, and as I cut them, the reality that stared back at me was, to say the least, crushing. I crumbled under a wave of disappointment. These, whatever these were, couldn’t be eaten as the fruit called mango. What an anti-climax!!

The question then was what do you do with pretentious mangoes that look ripe and luscious but neither smell not taste like them, all the while ensuring that one gets back some semblance of calm after this terrible betrayal? I was ready to boil them in chillies and oil!!! Well, nearly. Throwing in a tempering of panch phoran and red chillies in the hot oil, I cooked the mangoes on low fire with a little water for a few minutes with green chillies, salt and jaggery. Having lost their pretence, I enjoyed this chutney version of them still a little warm with my meal and later, on its own, experiencing the subtle, almost faint mangoes!! Refrigerated the leftover chutney. It tasted even better after being cooled as I found double satisfaction in first boiling and then super cooling that pretence!! One piece of advice – don’t waste “real” ripe mangoes on this chutney, reserve this treatment only for the pretentious ones.