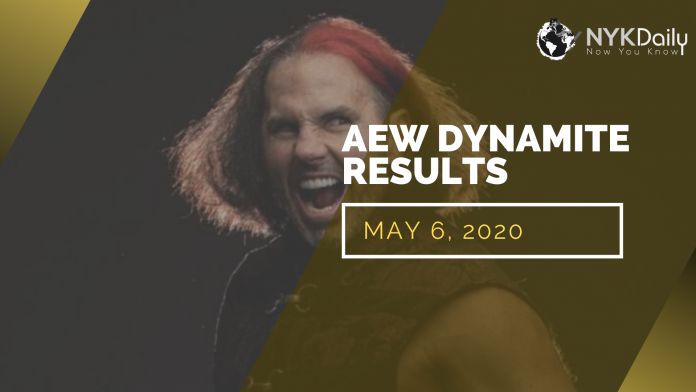 Cody wins the match with the Cross Rhodes.

After the match, Cody shakes Joey’s hand in respect. We get a recap of Nyla Rose acquiring the Women’s Championship and possible challengers to the titles such as inner: Penelope Ford and Britt Baker. Nyla Rose grinned at the video package and he asks Tony who he thinks is the most dominant woman in the division. She cuts him off and says it’s her, it always has been her and it will always be her. She orders him to do his job while she does hers in the ring.

Nyla wins with ease with a trio of powerbombs.

Hikaru Shida and other women from the division stare at Nyla.

Shawn Spears recaps last week’s main event and says he blames one man for how the match went, and he blamed Cody. He says Cody could have stopped and thrown in the towel to stop the match, but he suggests he didn’t because he’s selfish and thinks he alone can carry the Rhodes legacy. Shawn also says Dustin’s career is over, and Cody has proven he can be cruel without even knowing it.

Moxley wins with the Paradigm Shift.

After the match, The Dark Order comes out and attacks Moxley. The rest of the SCU comes out to help, but they get taken care of as well. Brodie Lee comes out and says that he’s just here to answer the bounty put out on him, and he says there’s no crowd to lift him and none of their energy to spur him on. He’s not the same person he’s dealt with in the past. He is now a leader and makes lives extraordinary. If any of the Dark Order will stand up and sacrifice themselves for him, it will be glorious. And Lee says Moxley has something he wants and something he desires, the AEW World Championship.

Brodie precisely challenges for the championship, but he doesn’t know if Moxley is reasonable. He doesn’t know if he’s an actor, a movie star, an MMA fighter, a rebel, or a scared fatherless boy from Cincinnati. Whatever the case, he must answer his challenge or they will make him. Lee throws the microphone on the floor in his direction. Moxley says all Lee had to do was ask. He gets on his knees but Lee kicks him back down. The Dark Order assaults him again.

We get a Brandi Rhodes promo. She has a message for Britt Baker. She says we don’t truly know her, and that she’s the Chief Brand Officer of AEW, and we must keep her name out of her mouth.

Before the match, Lance Archer walks around ringside and takes out Jason Cade. Lance Archer wins with the Black Out and then banging his head into the mat like last week.

After the match, Britt Baker gives Brandi Rhodes a DDT on the outside and puts her in the ring. Jake Roberts comes out with a snake and places it over Brandi’s body.

MJF vs. Jungle Boy, Cody vs. Lance Archer for the TNT Championship, a Casino Ladder Match for an AEW Title shot, and Jon Moxley vs. Brodie Lee for the AEW World Championship is made official for Double or Nothing.

The Judas Effect by Jericho finishes Omega off for good.

After the match, the Inner Circle poses together with middle fingers.