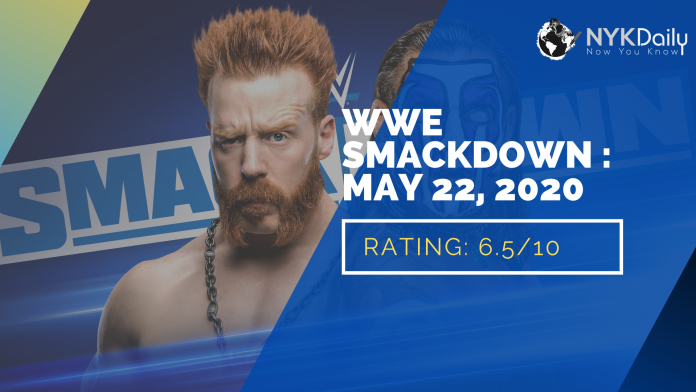 We start with a Memorial Day tribute.

We get the Dirt Sheet with Miz and Morrison. The Miz still can’t believe Otis is Money In The Bank. Morrison calls him Honey-Baked Ham. Miz says that Braun Strowman got into their business last week, which is stupid because he’s the Universal Champion and decided to team up with a man that could cash in on him at any time. Morrison said it’s just like Seth Rollins hooking up with Becky Lynch.

Miz says Strowman doesn’t deserve the Universal Championship and asks why he got the title match against Goldberg at WrestleMania. Morrison adds Strowman was replaced in the Wyatt Family by puppets, and Bray made the right choice. The Miz says a special guest on the Dirt Sheet are a bunch of puppets that didn’t make the Firefly Fun House. There are a bunch of puppets shown in succession that mock Strowman. Eventually, Braun comes out.

Braun says The Dirt Sheet isn’t actually half bad and he thanks them for having him on The Dirt Sheet. Morrison said that he’ll check with the producers because he wasn’t invited. Strowman says he’s here and ask him a question about Bray. Miz says Bray isn’t finished with him, and after he fought Bray, he changed and he had to face constant mental agony.

John then says Strowman isn’t half the man Miz is and that he’d wipe the floor with him one on one. Strowman asks John if that’s a challenge, and he accepts. He calls for a referee.

Braun Strowman vs. The Miz

Strowman wins with the running powerslam.

After the match, John Morrison calls out Braun and challenges Strowman to a 2 on 1 Handicap match for the Universal Championship at Backlash.

Styles wins with the Phenomenal Forearm.

We get a recap of the segment with Flair, Bayley and Sasha.

During the match, Flair calls for Sasha to come out. Bayley defeats Charlotte by rolling her up by holding onto the ropes.

Otis and Mandy Rose vs. Dolph Ziggler and Sonya Deville

Ziggler and Deville win when Deville gets a knee to the back of a distracted Mandy.

After the match, Ziggler superkicks Otis from behind.

Jeff Hardy says the IC title means a lot because it was the first title he won on his own. His last blaze of glory will go right through Sheamus.

We get another backstage promo with The Forgotten Sons. They say they’ve all had dark times, and it should make people feel uncomfortable. But it’s only fair that the blood of others are on their hands.

Backstage, Miz asks Morrison why he’d make the challenge to Strowman but Morrison is confident they have the advantage. John also notes that Strowman has a bad track record with handicap matches and they have impeccable teamwork. Miz eventually agrees and they start dancing and celebrating.

Hardy won with a roll-up.