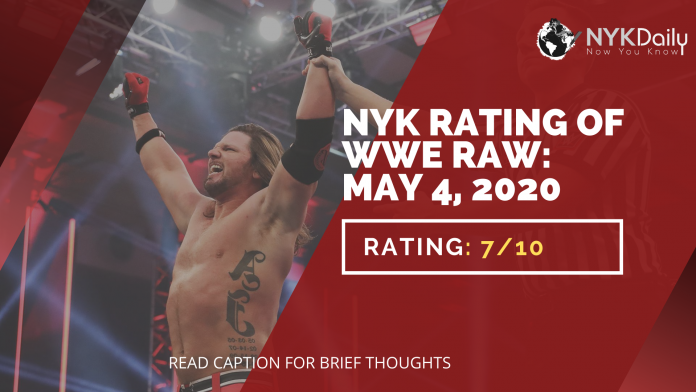 We start RAW with the VIP Lounge and MVP. He brings back the last week’s starting segment and says this week, we are going to return to style, sophistication and class unlike how the men’s segment went last week by having the women competitors from RAW in the MITB ladder match come out this time. However, he’s not too sure considering what happened between the three the last time they were in the ring. We get a recap of their brawl. Asuka, Shayna Baszler and Nia Jax all come out one after the other.

MVP asks everyone what they think will make them win. Jax says she’s destroyed everyone that’s been put in front of her, and her relentless nature is what will put her over the top. Asuka says something in Japanese and mentions Kairi a few times. She then says Big Booty and VIP. Shayna says opera non verba. MVP says he needs to brush up on his Latin. Shayna says what makes her unique is that her talking is done with her actions and that’s what differentiates her from everyone else. Asuka tells her something else in Japanese. She eventually says she has no manners.

Bobby Lashley eliminates Titus O’Neil, Akira Tozawa and Shelton Benjamin with Spears. Humberto Carrillo defeats Lashley by DQ when Lashley shoves the referee away. Lashley spears Carrillo in frustration after. Carrillo eliminates Garza by reversing the Wing Clipper into a roll-up and then he eliminates Austin Theory by rolling him up after a superplex. AJ Styles makes his return and he makes Carrillo tap out to the Calf Crusher. Styles qualifies for Money In the Bank after 41 minutes of yawn inducing Gauntlet.

After the match, Styles says he’s not a ghost or a zombie and there’s no Undertaker to steal his spotlight. He says while he got buried alive, but he didn’t lose anything because there’s no rules in a Boneyard match. That was then, this is now, and he has seized an opportunity. He’ll do anything to win MITB, even if it means throwing Aliester Black or Rey Mysterio off the top of WWE HQ. They haven’t seen what he’s seen, and they haven’t been through what he’s been through. He’s #1, and at MITB, he’ll win the contract, where he’s guaranteed to become WWE Champion. Mr. MITB will be Phenomenal this Sunday.

We are greeted by Seth Rollins for an exclusive interview. Rollins is asked for any last-minute predictions he has before this Sunday. Seth says whatever is meant to be will be. He has confidence in his disciple Murphy tonight. Rollins is asked how he can prepare for someone as dominant as McIntyre. Seth concedes that Drew is fantastic and individually dominant, but he’s not a leader and it’s not his destiny to be that champion. Seth says her question is basically how he plans to meet his destiny. Rollins is willing to sacrifice himself for the greater good that is his destiny.

Everyone thinks Seth is trying to take something from Drew McIntyre, but that’s not the case because being a champion is more than just what you do in the ring. You represent generations and an industry that is your responsibility to be that leader, and Drew is not ready for the agony, pain and despair that comes with carrying that title. He’s not trying to crush his dreams or take a title from him, but he wants to unburden him and save him. That is the truth. At Money In The Bank, his destiny becomes reality when he stands in the ring as champion.

Shane Thorne and Brendan Vink are backstage preparing and MVP says that it’s a miracle they have an opportunity to make a name for themselves against Cedric Alexander and Ricochet. Vink says they’ve tasted defeat before, but they plan to rectify their past missteps and come out on top.

Edge and Orton will be on RAW next week.

Murphy is backstage and is asked about his match against Drew tonight. He’s asked about his loyalty to Rollins. Murphy says Seth took him under his wing, and that he needed Seth just as how Seth needed him. Seth knows that the day will come where Murphy will eventually become better than Seth, but that’s down the line. Murphy believes Seth can defeat Drew, but he knows that he can.

Ricochet and Cedric Alexander vs. Brendan Vink and Shane Thorne

Ricochet superkicks Throne out of the ring, but Vink is able to hit a big boot onto Ricochet from behind and pins him for the win in 5 mins.

NYK Daily Rating: 2/5. Giving them 5 more minutes from the boring gauntlet match would have made this bout very interesting. I like the team of Ricochet and Cedric Alexander.

The Street Profits vs. The Viking Raiders

Montez Ford is able to hit the frog splash, but Erik quickly knees Dawkins in the face while h’s making the cover, and they hit The Viking Experience on Dawkins to finish the Profits off in 16 minutes.

Drew is asked for his reaction to Murphy’s comments earlier. McIntyre says if Murphy thinks he can beat him, he must have Claymored him harder than he thought last week. He calls him a confused, young man that Seth is looking to manipulate for his own purposes. But if Murphy is willing to be sacrificed for his Messiah, and if the Messiah is willing to sacrifice his disciple, then who would he be to deny the people a good old fashioned slaughtering?

The Viking Raiders are interviewed about their victory backstage. Erik says this is about dominance and Ivar says that they respect the Street Profits, and they even like them. However, they proved they are the better team. Erik says they extinguished the smoke.

We get an Aliester Black promo, and he asks AJ Styles to tell all of us how it felt to be buried six feet deep all alone in the darkness, clawing for a way out and being swallowed by darkness. One thing it didn’t do was humble him because Styles threatened to throw him off a building. If Styles finds a way to throw him off that building, pray that he doesn’t get back up, because he will climb that ladder, and take that contract. When that happens, you will have wished that you were buried deeper than just six feet.

Rey Mysterio is backstage. He says he’s been a WWE superstar long enough to know what to expect before entering a certain match. However, this situation is different because this match will take place at WWE HQ. One bad decision, one bad move, and that’s all he wrote. This is the riskiest match of his career, but the briefcase contains a briefcase for a championship match any time, any place. While he admits his career is closer to the end as opposed to the beginning, and he doesn’t know how many title matches he has left. While it’s risky, the risk is worth the reward.

Charlotte Flair comes out and says she’s the hardest working woman in the history of this industry, pulling double duty on Mondays and Wednesdays. She talks about her opponent Io Shirai, and the fact that she called Flair her dream opponent. Flair says it will be privilege to make her dream come true when she forces Io to bow down to the queen. Liv Morgan comes out and asks Charlotte if she remember who she is.

Flair says she’s thinking and that Flair wants to take the new Liv Morgan seriously. Morgan talks about Flair having a silver spoon in her mouth and she tells Charlotte one day she will be a champion, and if she has to take down a couple of backstabbers or self-entitled queens to do it, then that’s what she’ll do. Flair states she’s proud Ric Flair is her dad, and she thought Morgan was going to say she was her dream opponent. Flair says Morgan and Io will have no choice but to bow down. Morgan says to get a ref out and see what happens.

Flair wins with the Figure Eight in 12 minutes.

NYK Daily Rating: 3/5. Good Match. It was evenly timed. Enjoyed them both fighting each other. It felt fresh.

Murphy mocks Drew’s countdown before running right into a Claymore in 6 minutes.

NYK Daily Rating: 2.5/5. Murphy sold it so brilliantly in the match. It was another strong showing by Drew McIntyre.

After the match, Seth approaches the ring, and Drew tells him he’s a very patient man. He dares Seth to get in the ring and fight him right now. Instead, he walks away. Drew isn’t surprised. However, Seth comes back from behind and superkicks him in the face. Seth shouts to Drew that this is bigger than him. Rollins goes for a Curb Stomp, but Drew moves out the way in time and headbutts him. Drew goes for a Claymore, but Seth is able to retreat at the last second. Drew stares Rollins down as RAW goes off the air.

Top 3 stars of the show

Liked our coverage? Download our Mobile App Now to stay updated in 50+ Categories. We go live from all six continents, everyday, 24 hours a day.