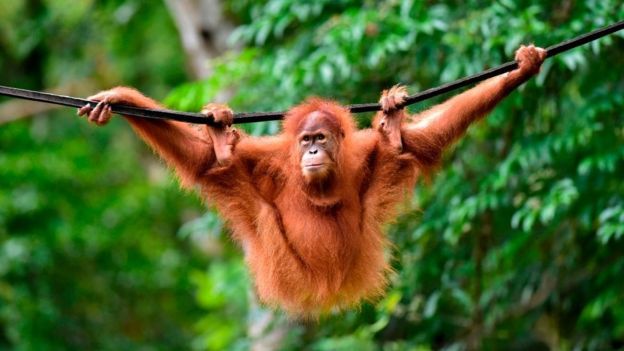 Gorilla tourism in Africa has been suspended, while sanctuaries for other apes, such as orangutans, have closed to the public.

It’s not known if great apes can contract the virus, but there are growing fears that our closest living relatives might be equally at risk. This week a tiger at Bronx Zoo tested positive for coronavirus. New measures have been put in place to protect big cats and their caregivers.

Dr Kirsten Gilardi is chief veterinary officer for Gorilla Doctors, which provides veterinary care to gorillas in the forests of Rwanda, Uganda and the Democratic Republic of Congo.

“We don’t know if it’s infected mountain gorillas; we have not seen any evidence of that,” she said. “But because mountain gorillas are susceptible to human pathogens, we know that they can develop respiratory illness.”

Mountain gorillas (Gorilla beringei beringei) are an endangered species of great ape found only in the forests of Rwanda, Uganda and the DR Congo. All three countries have seen human cases of coronavirus, with gorilla tourism currently suspended.

The work of vets and rangers who care for wild gorillas continues, but with added precautions. “Much of what we’re practicing right now, in terms of social distancing, and self-quarantine, are at the heart of the recommendations for protecting great apes as well,” said Dr Gilardi, who is also a veterinary professor at the University of California, Davis.

Even before the outbreak, people were asked to stay seven metres away from gorillas at all times. New guidance from the International Union for the Conservation of Nature (IUCN) calls for a minimum distance of 10 metres from great apes, with visits by humans reduced to the minimum needed to ensure their safety and health. No person who is ill, or who has been in contact with a sick person in the preceding 14 days, should be allowed near them.

Habitat loss and poaching are big threats to the survival of great apes, but viruses are also a concern. Infectious disease is now listed among the top three threats to some great ape groups. Past research has shown that chimps can contract the common cold virus, while the Ebola virus is thought to have killed thousands of chimpanzees and gorillas in Africa.

Serge Wich, professor of primate biology at Liverpool John Moores University, UK, said many governments had closed down tourism with great apes, while researchers and sanctuaries were taking extra measures.

He said: “We don’t know, if they were to get infected, what the health effects would be, but obviously given the health implications for people it’s a risk we do not want to take with great apes so these precautions everyone’s taking are an important step to try to reduce that risk.”

Sepilok Orangutan Rehabilitation Centre on the island of Borneo is one of many sanctuaries for great apes that has closed its doors to the public.

Susan Sheward, founder and chairwoman of Orangutan Appeal UK, said in a statement: “This disease could be fatal for the already critically endangered orangutan, it is a risk that we cannot afford take. OAUK will do everything it can to make sure that the orangutans at Sepilok stay healthy and safe.”