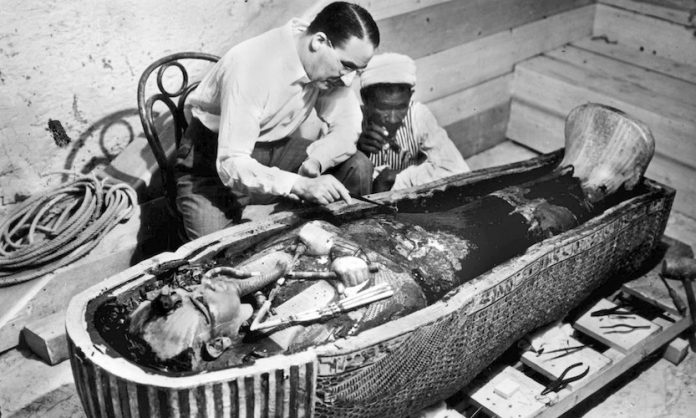 King Tutankhamun (King Tut) was the young Pharaoh who succeeded his father Akhenaten around the end of the 18th Dynasty. During his brief 9 year rule, he rebuilt Thebes (Luxor) as the Capital of Egypt and commenced the return of worship of Amon.

Egyptologists were not engaged in finding his tomb as they thought it would have poor content. At the time, it was concluded that that Valley of Kings had yielded all its’ tombs. Lord Carnarvon, a rich Englishman thought otherwise and was convinced that there was an intact tomb.

Howard Carter traveled to Lord Carnarvon’s Team and worked dedicatedly for six seasons. About 200,000 tons of rubble were moved, and Howard Carter was compelled to accept that there were no more tombs to be found in the Valley of the Kings. There was one last remote chance, the site immediately below the tomb of Ramses VI. It was covered with workmen’s huts and Carter had his men remove them.
In 1922, a doorway of a tomb was located at the bottom of some steps. The seals appeared to be intact and Lord Carnarvon was informed while preparations were made to open the tomb. When they opened the tomb, it far exceeded their wildest dreams.

We can only imagine the awe and surprise of finding the treasures now found in the Egyptian Museum in Cairo. Lord Carnarvon visited the opening but never lived to see the full contents of the tomb. The death of Lord Carnarvon was connected to ‘The Pharaoh’s curse – a sting from a mosquito.

The tomb was small but thronged with furniture, statues, jewelry, and a wealth of treasures that were meant to be used by the King in his afterlife. Carter spent 10 years classifying the contents and recorded 171 objects in the first room alone. When he made a small crack in the door of the tomb chamber, there emerged to be a solid wall of gold. It was an immense gold-gilded shrine with 3 other shrines layered inside. In the center were a stone sarcophagus and three mummy coffins. The one holding King Tut’s remains was solid gold and weighed 2,488.8 Ibs.

The mummy itself was enveloped in gold objects, bracelets, chains, collars, gold beads, and necklets of precious and semi-precious stones, engraved scarabs, and garlands of flowers. A solid gold mask embraced the head. Only the inner mummy case, which contained the actual mummy of the Pharaoh has been left in the tomb itself. The rest of the treasures are now exhibited in the Egyptian Museum in Cairo.

The tomb is the most miniature found in the Valley of the Kings the first chamber measuring 8 x 4 meters with bare walls. The small second annex contained containers for oils, baskets of fruit and seeds, wine jars, and pottery, all decked in alabaster, ebony, turquoise, gold, lapis-lazuli and Ivory. The walls in this chamber were also bare.

The burial chamber itself is the only one with polished walls. The paintings of religious scenes and writings are in great condition retaining the vivid colors of the days they were painted. There are full-length figures on three of the walls beneath a dark-colored roof that represents the sky. The figures appear top-heavy which is typical of the Amarna period. Another wall has images from the Book of the Dead.

Why were there so many riches in the young King’s Tomb and why did it seem that they were in chaos rather than placed in a tidy pattern? This can be readily resolved. Tutankhamun was the last of his family line and his tomb was filled with family treasures as well as his own. Many of the items were taken from the royal Temples of Tel El Amarna. For example, the priceless royal throne on display in the Egyptian Museum shows King Tut being anointed by his wife with a backdrop of the Sun God Aten, the symbol of his father Akhenaten’s heresy.

Tutankhamun fully renounced his father’s teachings but carried the symbols to his grave with the artifacts left in his tomb.

Many of the glazed vases and scepters belonged to his father’s reign. Some of the funerary objects were confirmed to have been made for Semnekh-Ka-Ra, Akhenaten’s son-in-law, and co-regent. This involved one of the larger shrines, some of the mummy ornaments, and the miniature canopic coffins.

This is a hint that the tomb was used in a hurry as a result of the King’s unexpected death at a young age. It is apparent the there was no time to finish the tomb. It is doubtful if it will ever be known exactly if the King died by accident or was assassinated. It appears from forensics carried out that he likely died from a knock to the head.

If it is determined that the young Pharaoh was murdered, it suggests another question as to who was guilty? Was it his tutor Eye, who married his wife after his death. Or was it General Haremhab (Horemheb) who wanted the throne and grabbed it from the blue-bloods at the commencement of the 19th Dynasty? We will likely never know.