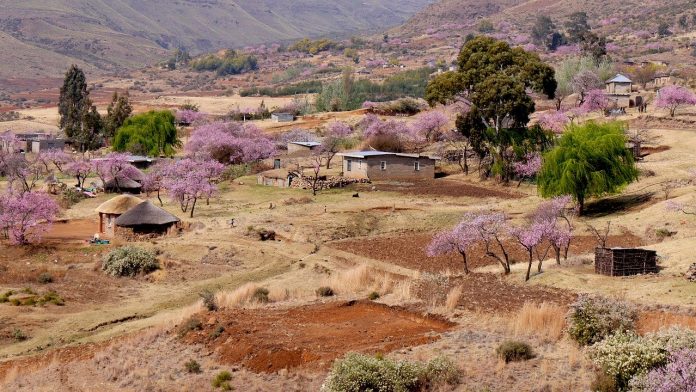 Surrounded by South Africa on all sides, but isolated from it by the huge Drakensberg and Maluti mountain ranges, the mountainous kingdom of Lesotho is small and rounded in shape, located on a plateau of over 3,281ft (1,000m), with hills reaching to heights of more than 10,000ft (3,000m). Sani Pass is a breathtaking entry point into Lesotho from South Africa’s Drakensberg National Park and is the gateway to the ‘Roof of Africa’ scenic route, linking the majestic landscape of the two mountain ranges.

Usually described as the ‘Kingdom in the Sky’, the elevated highlands are characterized by majestic mountain scenery, crisp mountain air, and the simple tranquility of the ancestral lifestyles of its people. Pony trekking is one of the finest ways to experience the Lesotho highlands, with time spent in remote Basotho villages scattered among the grassy hills, where waterfalls saturate the surrounding rocks with rainbow-colored mist and crystal clear streams criss-cross the panorama.

The region is also perfect for those who prefer to test the sure-footedness of their own two feet, with miles of solitary scenery to appreciate, an abundance of trout in the rivers and dams, and the assurance of a warm and friendly welcome in the rough mountain settlements. The central highlands are home to the highest waterfall in southern Africa, the Maletsunyane Falls near Semonkong, meaning ‘Place of Smoke’, which thunders from a height of 624ft (192m) and is at its most magnificent during the summer rainy season.

From the heights of the Maluti Mountains, the land descends to the western lowlands where all the major towns are to be found and where two-thirds of the population live. Maseru, the capital, is a captivating city of varying modern and traditional lifestyles. Blanket-clad horsemen sidestep the traffic jams on their way to market, and woven handicrafts are presented on the busy pavements outside new glass buildings filled with self-important office workers.

Time spent in Lesotho will allow visitors to witness an African country filled with an exceptional appeal, a kingdom of rough beauty, and an unchanging society that remains natural and largely unaffected by tourism.

Weather conditions in Lesotho vary considerably depending on the altitude. Summer is the hot, rainy season from October to April, with the hottest days in January and February, and the most rain falling between March and May and October and November. Days are sunny with afternoon electric thunderstorms, and temperatures range from around 86ºF (30°C) in the lowlands with cooler temperatures as the altitude rises, averaging about 64°F (18°C) in the mountains.