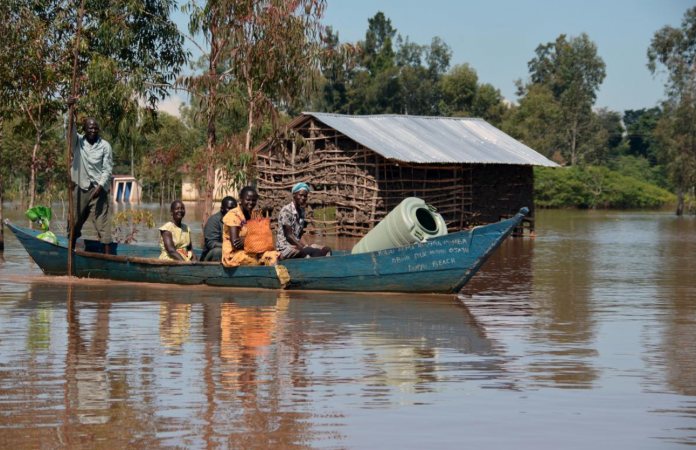 Grandmother Millicent Agata’s small farm has disappeared entirely under the floodwaters of a swollen Lake Victoria, forcing her family to join tens of thousands of other Kenyans seeking shelter from the worst floods in three generations.

Agata, from Khadundu village in western Kenya’s Busia county, has been living in a temporary camp for displaced families for at least three weeks.

“The water came and swept away our houses and everything we owned; we came here with nothing. We are in great need of assistance, especially food,” Agata said, as she prepared a meal for her grandchildren.

Floods and landslides have killed at least 194 people in the East African country and displaced 100,000, the government said earlier this month. The region is also being ravaged by an invasion of locusts.

Lake Victoria, on Kenya’s southern border, has washed over farmland and houses. Scientists say it hasn’t been this high since 1964.

Some of those forced to move are fishermen like Michael Arakwa. “This is one of the biggest disasters we have ever witnessed here in Bunyala,” he said.

Environmental campaigners say climate change is exacerbating problems caused by deforestation and poor land management. East Africa had a record number of cyclones last year. “The floods, the drought, the wildfires that we see are a result of the climate crisis,” said Amos Wemanya, a campaigner for Greenpeace Africa. “We don’t have time to waste.”