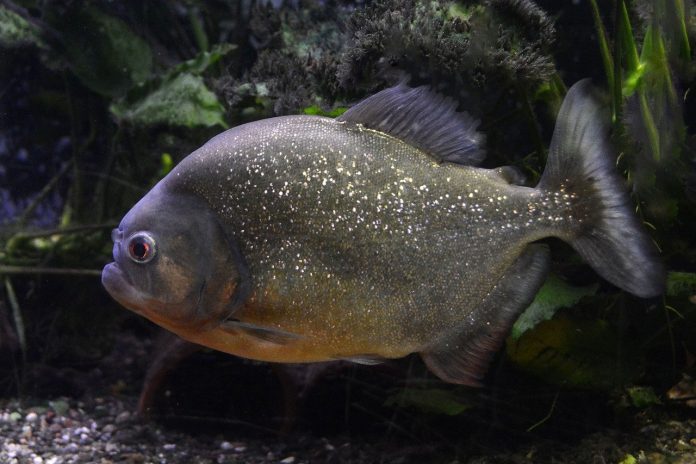 The piranha is a freshwater fish native to South America. It flourishes in schools in the rivers and ponds of the rainforests of the Orinoco River and the Amazon basin. Before we go ahead, a school or shoal is a vague term for Piranhas coming together as a group in order to better avoid predators.

All known varieties of piranha fish belong to two genera, namely Pygocentrus and Serrasalmus. Piranha schools are known for their vicious feeding frenzy, but this phenomenon occurs only when there is a shortage of food. According to stories, they feed on their prey until only the bones are left, but this phenomenon is quite rare. They hunt in groups, but they also keep these large schools in order to protect themselves from natural predators such as birds, caimans, otters, turtles, water snakes, and human beings.

Piranhas are omnivores, but they are better identified as flesh-eaters or opportunistic carnivores. While single piranha fish would eat only smaller fish, piranha schools can and will strike and swallow small mammals and larger fish. Some of the animals that often fall prey to schools of piranha are crustaceans, birds, amphibians, and lizards. They also attack land animals that venture into their innate habitat. They are the most effective and dynamic during the day. Smaller piranha fish hunt mostly at dawn, while larger piranha takes their fill in the evening or late afternoon.

Aside from its almost mythological feeding behaviors, perhaps the reputation of the piranha has closely tied to its most prominent anatomical feature-the the razor-sharp teeth. The piranha has a large and strong lower jaw full of sharp teeth. The upper and lower jaws are outlined with an even row of teeth. When one is broken it is instantly replaced with new growth.

Learning genuine piranha fish facts helps us understand better the fish known in Venezuela as the “caribe.” They lay their eggs in the lakes and rivers of the tropical rainforest. Their main breeding grounds are the lagoons. The female lay groups of eggs in nests dug in the sand in the shape of a bowl. The male fish then fertilizes the eggs. When piranhas are reproducing, the belly of the fish grows reddish in color, while the rest of the body grows lighter. Piranha breeding habits in the wild is somewhat similar to that of birds. When it is nesting season, the adult piranhas patrol their spawning territory in order to defend the eggs.

South American fishermen catch piranha fish and eat them. They are also a staple food product in local wet markets. Aside from food, the piranha is beneficial to humans as a source of powerful cutting tools. The upper and lower jaws of the fish with its sharp teeth are collected and used in pursuits that need shearing and puncturing. When pressed tightly, piranha teeth can also be used as a dangerous weapon. For the tourist trade, some locals dry the whole specimen under the sun and sell them to tourists as keepsake items.

Swimmers in freshwater rivers and lakes where piranhas are known to live have described being bitten or injured. Nevertheless, most of the bloody stories about marred body parts are false accounts. Locals would swim in waters that serve as a natural habitat for piranha and usually come out uninjured.