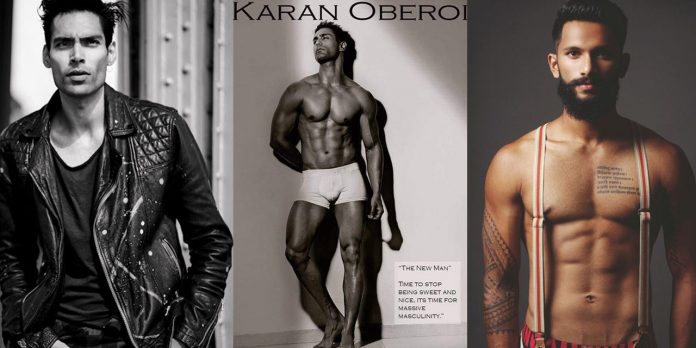 Indian modelling industry has produced one of the finest male models in the past, few such names are Milind soman, Dino Morea, Muzammil Ibrahim and many others.

Many male models have made their name and fortune walking the ramp, endorsing fitness brands and fashion labels, print work such as doing fashion editorials, or being a poster boy for commercial brands and appearing in television commercials. India’s top ten male models in 2020 are following:

Rohit is an Indian model, actor. Rohit rose to fame after he won Mr India 2015 and the first-ever Asian to be crowned Mister World in the 2016 contest. He has also appeared in an ad with Kareena Kapoor for a jewelry advertisement. Rohit made his television show debut in episode 76 of Yeh Hai Aashiqui, an Indian television series that presented a dramatization of love stories which was aired on Bindass.

Karan is an Indian fitness and fashion model. Winner of famous titles such as ‘The youth icon model of the year’, ‘Top fitness model’, Mr. best body and many others. Karan Oberoi is the only name who has been part of fitness and fashion industry both. He has walked the ramp for famous designers such as Rohit Bal, Arjun Khanna, Varun Bahl, Rajesh Pratap Singh, and many others. He has walked 300 plus fashion shows across the globe and has also worked with more than 100 fashion and commercial photographers such as Dabboo Ratnani.  Karan Oberoi is also known to be the face of Royal Enfield motorcycles, Reebok India, and poster boy for Fashion Big Bazaar for 2 consecutive years. He is the most followed model on Instagram till date and has also been an official brand ambassador for famous fitness brand British Nutrition and Viva Fitness.

He was first seen at Van Heusen India Men’s Week 2011 has already been part of many fashion shows walking the ramp for Indian designers, digital and print campaigns. This Handsome Kashmiri boy is also aiming to join the Bollywood industry soon.

He is a beauty pageant titleholder who won the title of Mister Supranational in the year 2018. Maulingkar is also a  footballer player and is the only player in Asia to be featured on the cover of Men’s Health magazine.  He is a  fitness trainer too and owns a gym in Goa.

He is a model and actor from Batala, Punjab who currently resides in Mumbai. He holds a degree in BFA Applied Art and began his modelling career in 2012. He has work with numerous national and international brands/designers like Raymond, Titan, Ducati motorbikes, Skap, JJ Valaya and Manish Malhotra. Currently he is also doing a big banner movie with director Rajkumar Santoshi. His professional experience also includes working as a Creative Concept Consultant and a Photographer. Notably, he has been the face of Raymond RTW since 2015. Nitin is a creative individual by heart and mind, so he also paints and sketches alongside being a model.

He is in big demand and is the face of luxury brands and also one of the oldest male models we have in our country today. His beard and lean body set the ramp on fire. Originally from Kashmir, Rouhallah Gazi has made a name in the fashion world. He is popular for being part of Raymond advert.

Manu Bora one of the best looking male models from India.  He is simple yet stylish.  Manu Bora has been a part of many modeling campaigns like Lecoanet Hemant, Mr. bowerbird, Ayurveda and for designer Sabyasachi.  With his dapper looks, Manu has also won awards in fashion for excellence.

Prabh Uppal is one of the glamour struck male models from Ludhiana. Prabh is good looking, stylish, and hot. He is also married to a foreigner. Chiseled features and lean body made him a star on-ramp.  Prabh Uppal has done modeling for Tarun Tahiliani couture, Anita Dongre, Sabyasachi and Manyavar who are the well known Indian fashion designers.

Mudit is a New Delhi-born, Mumbai-based actor and fashion model, also an inspiration to many. He started his career with winning the Title of Mr DELHI TIMES and Ramp Shows for top Indian designers top-notch fashion designers such as Rohit Bal, Tarun Tahiliani, Shantanu & Nikhil, Pawan Sachdeva amongst others.

4 Famous Designers That Brought A Revolution To The Fashion World