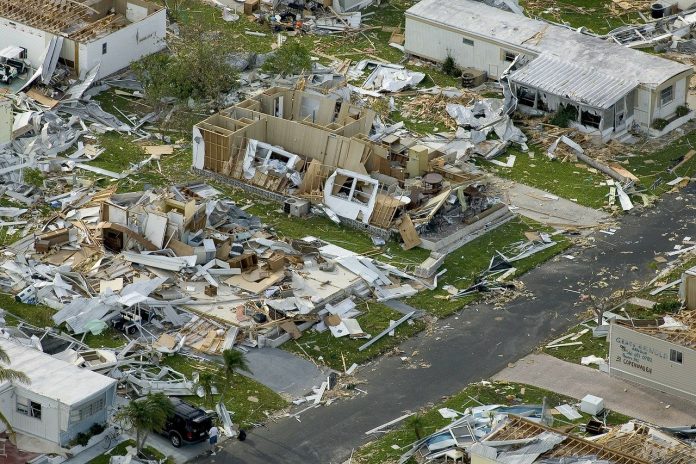 As cyclone ”Amphan” is currently whirling at a speed of 70 kmph over Bangladesh a day after leaving a trail of devastation across a wide swath of West Bengal and Odisha, the Union Ministry of Home Affairs (MHA) is setting up special teams to visit these states and assess the damages.

These teams – separate for West Bengal and Odisha, reportedly headed by Deputy Secretary or above rank official and comprising a total of almost a dozen people from various ministries, and are expected to arrive in these states by Thursday evening or Friday, informed sources said.

These teams, learnt to comprise officials from the Disaster Management, Finance, Jal Shakti Ministries, the India Meteorological Department (IMD), the National Disaster Response Force (NDRF) among others, will assess the damage and “submit an early report” to the MHA.

Cabinet Secretary Rajiv Gauba, in a review meeting of the National Crisis Management Committee (NCMC) here on Thursday, also said that the Home Ministry teams will be sent to these states to carry out early assessment of damages and submit a report.

The visiting teams will meet those evacuated timely from the two states before the cyclone ravaged the regions, killing over a dozen people and destroying houses, roads and public utilities.

Chief Secretaries of Odisha and West Bengal informed the Cabinet Secretary on Thursday that timely and accurate forecast by the IMD and advance deployment of NDRF facilitated the evacuation of about five lakh people in West Bengal and about two lakh in Odisha.

The Home Ministry teams will submit the report based on which Central assistance will be declared. However, the states informed in the NCMC meet that there was minimal loss of human lives, considering the fact that the intensity of ”Amphan” was next only to that of the super cyclone that struck Odisha in 1999 causing large scale devastation.

The teams will also meet the residents in the presence of the state administrations, which along with the NDRF and other rescue teams, have done commendable relief work as the cyclone pummelled its way over large parts of West Bengal and Odisha through the night, leaving behind a trail of deaths and damages.

West Bengal has informed the Centre that there were major damages to agriculture, power and telecommunication facilities in cyclone-affected areas. Odisha informed that damages have been mainly limited to agriculture.

Reviewing the rescue and restoration efforts, the Cabinet Secretary directed that officers of Central ministries and agencies should remain in close touch with Odisha and West Bengal state governments and provide all required assistance expeditiously.

Meanwhile, the NDRF has moved additional teams in West Bengal to speed up restoration work, especially in Kolkata. A total of 36 NDRF teams were earlier deployed in both the states, while rescue and relief teams of the Army and Navy along with ships and aircrafts of the Navy, Air Force and Coast Guard have been involved in relief operations.

While Odisha was spared the worst of ”Amphan”, the Sunderbans region and six south Bengal districts felt the full impact of winds gusting at 155-165 kmph along with torrential rain after the cyclone made landfall near Sagar Island around 2.30 p.m. on Wednesday and entered Kolkata, about 100 km north, around 5 p.m.

In the first few hours ”Amphan”, a Thai name means sky, already destroyed over 5,000 houses in Minakhan, Haroa, Basirhat Hingalganj and Hasnabad areas of North 24 Parganas district in West Bengal. Most of the areas in Howrah and North 24 Parganas faced massive power cuts due to heavy rainfall. Roofs of several houses also collapsed as a result of the strong winds during the cyclonic spell. There have been damages inside the state secretariat building Nabanna as well.

Heavy rains and huge gush of wind storms damaged the roofs of several buildings and uprooted a massive number of trees across Kolkata and its adjoining Howrah district in West Bengal.

The Food Corporation of India, meanwhile, is on the job to ensure adequate availability of food grains, especially rice, to West Bengal so that marooned people are provided immediate sustenance, a Home Ministry official said.

The Power Ministry and Department of Telecommunications have been assisting in early restoration of services in both the states. However, the Railways, which suffered major damages to its infrastructure, is in the process of restarting its operations at the earliest, said the official.

Barrelling in from the Bay of Bengal with wind speed of up to 185 kmph, Amphan on Wednesday cut a swathe through northern Odisha bearing down on West Bengal and moved north-northeastwards on Thursday, before weakening into a cyclonic storm and lying centered at 5.30 a.m. over Bangladesh.

The National Disaster Response Force on Thursday said that four additional teams are being airlifted to West Bengal for restoration work, a day after the state suffered the wrath of Cyclone ”Amphan”.

The decision came after the Union Cabinet Secretary held a meeting with the West Bengal and Odisha Chief Secretaries to estimate the damage and response pursuant to the savage cyclone.

Addressing a press briefing, NDRF Director General S.N. Pradhan said that the team will reach Kolkata Airport by 7.30 to 8.30 p.m. “West Bengal has suffered huge damage, and, on their request, four teams are being sent for restoration purposes.”

NDRF had earlier deployed 21 teams in West Bengal, which became active as the cyclone struck late afternoon on Wednesday. Meanwhile, 20 teams were positioned in Odisha.

He further announced that Odisha did not suffer much damage and the life in the state will return to normalcy in the next 24 to 48 hours. “Over 2,37,296 people were evacuated in Odisha but some of them have started to return back to their homes.”

While Odisha was spared the worst of ”Amphan”, the Sunderbans region and six south Bengal districts felt the full impact of winds gusting at 185 kmph along with torrential rain after the cyclone made landfall near Sagar Island around 2.30 p.m. on Wednesday and entered Kolkata around 5 p.m.

Director General of India Meteorological Department (IMD) Mrutyunjay Mohapatra said that the observed track of Amphan was forecast very well by the weather agency which resulted in minimal damage.

“The cyclone crossed over to Bangladesh at 11.30 p.m. on Wednesday. It has now weakened to a deep depression in Bangladesh.”

He added, “50-60 kmph wind speed expected in Bangladesh and Meghalaya for next 3 hours, this is not expected to cause any structural damage, can at most affect some trees, no strong winds expected tomorrow.”

The Director General said that very to extremely heavy rainfall is expected in Assam especially in western part and in Meghalaya. Arunachal Pradesh will also receive some rainfall at isolated places.

As many as 4.5 Million people in 89 blocks have been affected in Odisha by cyclone Amphan, according to an official, here on Thursday.

As per the preliminary reports, around 6,745 villages in 1,500 panchayats under 89 blocks had been affected by cyclone Amphan, said Odisha Chief Secretary Asit Tripathy. Crop in nearly 100,000 hectares land was damaged, he added.

Around 4.5 Million consumers had been affected, he said during a National Crisis Management Committee (NCMC) meeting, chaired by Union Cabinet Secretary Rajiv Gauba through video link, to review damages caused by the cyclone.

Tripathy said damages to agriculture would be assessed within two days.

Around 2,00,400 people have been evacuated and sheltered in 3,228 cyclone shelters and other buildings. The social distancing norms were being maintained, he added.

All fishermen had been brought back from seas and 22,050 fishing boats in the coastal districts berthed in safe places.

About 210 medical and 75 veterinary teams had started rescue operation in affected areas, Tripathy said and added, cleaning of road and restoration of power supply had been fast tracked.

While drinking water supply has been resumed, power supply to around 80 per cent of affected consumers in the Central Electricity Supply Utility (CESU) area been restored. Around 86 per cent of mobile connectivity has also been restored.

With the prediction of cyclone”s path by the Indian Meteorological Department, the state government had positioned rescue teams in the coastal districts. These teams included 16 from the National Disaster Response Force, 15 from the Odisha Rapid Action Force, 217 from the Fire service and 75 from the Odisha Forest Division Corporation.

Union Home Minister Amit Shah on Thursday urged people in West Bengal and Odisha to stay indoors and follow the instructions issued by the administration in the aftermath of severe cyclonic storm ”Amphan”, which left a trail of devastation in the two states on Wednesday before moving towards Bangladesh.

After the cyclone claimed over a dozen lives in West Bengal besides destroying houses, roads and public utilities in the two states, Shah assured that the government led by Prime Minister Narendra Modi was committed towards the safety and security of every citizen.

He said that National Disaster Response Force (NDRF) teams were already on ground to help the people in need as over 7 lakh people — 5 lakh from West Bengal and 2 lakh from Odisha — were evacuated before the cyclone made its landfall on Wednesday afternoon.

“I urge people of West Bengal and Odisha to stay indoors and follow instructions. Praying for everyone”s safety and well-being,” Shah tweeted.

The Home Minister said that the Central government has been monitoring the cyclone Amphan, a Thai name that means sky, and is in continuous touch with the concerned authorities.

A day after wreaking havoc in West Bengal and Odisha after barreling in from the Bay of Bengal with wind speed of up to 185 kmph, Amphan on Thursday weakened and lay centered over Bangladesh with a wind speed of 27 kmph.

It moved “north-northeastwards with a speed of 27 kmph during the past six hours, further weakened into a cyclonic storm and lay centered at 5.30 a.m. on Thursday over Bangladesh near latitude 24.7 degrees N and Longitude 89.5 degrees E about 270 km north-northeast of Kolkata, 150 km south of Dhubri and 110 km south-southeast of Rangpur (Bangladesh),” the India Meteorological Department (IMD) said.

Amphan is the most severe storm in the Bay of Bengal since the Odisha super cyclone of 1999. West Bengal has informed the Centre that there were major damages to agriculture, power and telecommunication facilities in the cyclone-affected areas, while Odisha informed that damages have been mainly limited to agriculture.