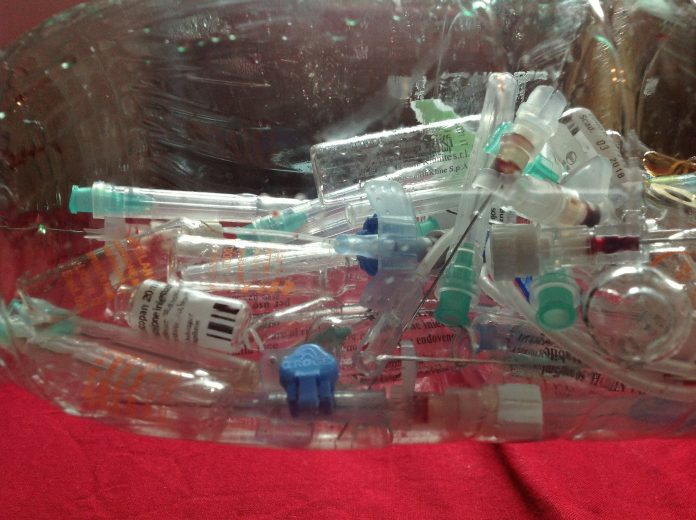 Limited management facilities accompanied by shortage of trained manpower in managing biomedical waste have posed a serious challenge before local urban bodies and companies involved in the fight against coronavirus.

Director of North Delhi Municipal Corporation, Ira Singhal said the MCD is following all the prescribed guidelines laid down by the government.

“We have two agencies to take care of garbage collection — one for picking the biohazardous waste and the other for its disposal. We have appointed a person who incinerates biohazardous waste. Our sanitation workers are involved only in the cleaning part and not picking up the waste because there is dedicated staff for it,” she said.

“There are existing protocols for disposing of biohazardous waste. But since such waste is coming from even households, our staff who collect the waste house-to-house pick it from quarantined houses and hand it over to the agency involved in its disposal,” said Singhal.

The SOP set up by the Central Pollution Control Board, (CPCB) for dealing with the biomedical waste during COVID-19 pandemic says that biomedical waste generated from quarantine areas and containment zones should be collected separately in yellow-coloured bags (suitable for biomedical waste collection) provided by urban local bodies. “These bags can be placed in separate and dedicated dust-bins of appropriate size. The waste should be handed over at the doorstep”.

Singhal said that the North MCD has formed docking stations outside all containment zones where personnel don and doff the PPE kits before entering and after leaving the containment zone. Then they are sanitized, only then they can leave for home.

“We have provided PPE kits to waste pickers as per the guidelines. The challenge before us is that due to this pandemic, the work load has gone up manifold,” she said.

Abhay Ranjan, Senior General Manager of Delhi MSW Solutions Ltd which is involved in waste management with North Delhi MCD said that collecting biomedical waste from quarantined households and containment or red zones is more challenging than collecting the waste from hospitals and nursing homes.

“Government quarantine facilities had their mechanism for biohazardous waste disposal and trained staff even before COVID-19. Therefore, the real challenge is collecting waste from quarantine houses. It is the most dangerous scenario. The number of hospitals is limited, but there are more than 20 thousand houses from where such waste is coming,” Ranjan said.

“We have arranged covered vehicles for collection of such waste. The driver, helper and anyone else who collects the waste wears the full PPE kit,” he said.

“On an average, we have been collecting around 400-500 kg waste per day in North Corporation since March 28. It is increasing. So far we have collected around 25 metric ton waste, excluding hospital waste,” said Ranjan.

“We are given low-quality gloves and masks which expire in a few hours. The MCD did not even give us I-cards during the lockdown. A few sanitation workers were beaten up by the police,” said Mehrolia.

There are separate sanitation workers for collecting waste from containment zones. “But how would we know that the waste we are collecting is safe to carry or who has thrown that waste in the street? There are many asymptomatic patients also these days. They should provide full kits to all sanitation workers. At least four of our people have died of COVID-19,” said Mehrolia.

Another worker and General Secretary of Delhi Pradesh Akhil Bhartiya Safai Mazdoor Sangh, Vijendra Bagdi alleged that apart from four deaths, at least 60 workers have reported corona positive in North Delhi MCD. “We are facing big trouble in the absence of masks, gloves and sanitizers. We are doing our work honestly,” said Bagdi.

However, North MCD Director Singhal denied the allegations and said that “no one has died from coronavirus in our staff”.

She said a few people were politicising the issue for their benefit. “Sanitation workers not involved in picking biohazardous waste don”t require full PPE kits, though we have enough of these kits,” Singhal said.