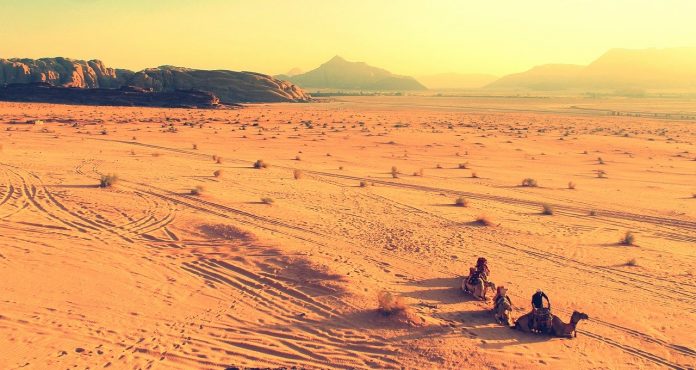 One of the most patient mammals, camel is an even-toed ungulate in the genus Camelus that exhibits unique fatty deposits known as “humps” on its back. Camels have long been domesticated and, as livestock, they provide nourishment, milk, and fiber from their hair.

Camels are serving animals particularly suited to their desert habitat and are a necessary means of transport for passengers and cargo. There are three living species of camel. The one-humped dromedary makes up 94% of the world’s camel community, and the two-humped Bactrian camel makes up 6%. The Wild Bactrian camel is a separate species and is now critically endangered.

The most initial known camel, called Protylopus, lived in North America 40 to 50 million years ago. It was about the measurement of a rabbit and lived in the open woodlands of what is now South Dakota. By 35 million years ago, the Poebrotherium was the size of a goat and had many more traits comparable to camels and llamas. The hoofed Stenomylus, which walked on the tips of its toes, also existed around this time, and the long-necked Aepycamelus emerged in the Miocene.

The direct predecessor of all modern camels, Paracamelus, lived in the upper Miocene to Middle Pleistocene. Around 3–5 million years ago, the North American Camelidae dispersed to South America as part of the Great American Interchange via the newly formed Isthmus of Panama, where they gave rise to guanacos and similar animals, and to Asia via the Bering land bridge.

The ice age was the time of mass migration of animals and camels benefitted immensely because of this journey.

But it was cold enough, during the ice age, it helped the camels evolve their humps — an evolution that would eventually prove useful in a largely different biological context.

As the Ice Age reached its peak, the camels moved south. On arriving at the deserts they found themselves surprisingly fitted to their new ecosystem.

Their big flat feet, evolved for spreading their weight over snow, helped them to walk on sand. The thick fur on their backs originally formed to keep them warm, now shielded them from the sun. And their three eyelids, once so powerful against snowstorms, now protected their eyes from wind-blown sand.

The camel’s hump is also beneficial in the desert. Almost all of its fat is stored there, rather than being evenly disseminated over its body, so it stays cool in heated environments. The hump isn’t rigid: if a camel uses up its stocks of fat, the hump contracts and bounces over to one side, only returning to its upright shape when the animal has fed and slept.

The Current Biology of Camels

The male dromedary camel has an organ called a Dulla in its throat, a large, inflatable sac he expels from his mouth in a rut to assert dominance and lure females. It resembles a long, swollen, pink tongue hanging out of the side of its mouth. Camels mate by having both male and female relaxing on the ground, with the male mounting from behind. The male usually ejaculates three or four times within a single mating session. Camelids are the only ungulates to mate in a sitting position.

Camels do not immediately store water in their humps; they are reservoirs of fatty tissue. Concentrating body fat in their humps reduces the insulating force fat would have if dispersed over the rest of their bodies, helping camels survive in hot climates. When this tissue is metabolised, it yields more than one gram of water for every gram of fat processed. This fat metabolisation, while delivering energy, causes water to evaporate from the lungs during respiration (as oxygen is needed for the metabolic process): overall, there is a net decrease in water.

Camels have a range of physiological adaptations that allow them to withstand long periods of time without any visible source of water. The dromedary camel can drink as rarely as once every 10 days even under very hot circumstances and can lose up to 30% of its body mass due to dehydration. Unlike other mammals, camels’ red blood cells are oval rather than circular in shape. This expedites the flow of red blood cells during dehydration and makes them more useful at withstanding high osmotic variation without rupturing when drinking large amounts of water: a 600 kg (1,300 lb) camel can drink 200 L (53 US gal) of water in three minutes.