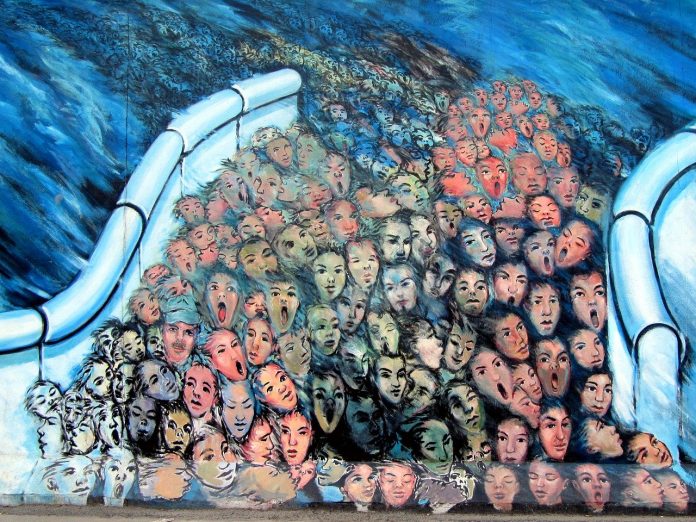 The Cold War that lasted for over 40 years was a fight between two ideologies. The Berlin Wall was one construction that was the most recognizable symbol that signified the conflict between the East and West. The Cold War ultimately ended with the fall of the Berlin Wall.

When World War II ended, Nazi Germany was cut into four precise occupation zones, they would, from this point, be governed by the Allied powers that included the British, French, Russians, and the Americans.

The city of Berlin was also split into four zones controlled by four Allied members. When the Cold War began in 1949, the Soviets developed a new state called the German Democratic Republic (GDR) which included Americans while French incorporated their regions forming one state called the Federal Republic of Germany including West Britain.

The two countries began to differ quickly as they were based on separate ideologies. The ideology of West Germany was based on the democratic government and West’s free-market system. The GDR was based on communist philosophy and the Soviet-Style economy. After a short span of few years when each country was formed, there were vast differences in the quality of customs and life.

Many living in the Eastern countries crossed through borders at East and West Berlin to escape the Sovietization and Joseph Stalin. There was no natural border between East and West Berlin in the early 1950s and the traffic moved freely between the cities. A lot of East Berliners moved back and forth between the border during this time. With time, the emigration to the West caused the Soviet Union and GDR to take action.

During the 1950s, nearly a million citizens left the GDR for the West. It was causing an immense brain drain since most the people who were highly experienced and trained.

The Soviets and the Eastern Bloc countries including the GDR soon started to crack down on this migration, a meeting took place between leaders of East Germany and Stalin on April 1, 1952. Stalin told the East Germans to quickly build up the border and to create a boundary line between East & West Germany, a frontier which the East Germans will guard with their lives.

As a result of the agreement, the border between East & West Germany was closed and a barbed wire fence was erected. With the rise of restrictions, many Eastern Bloc citizens and East Germans started dreading further tightening and began to migrate.

In 1956, as the movement continued on a large scale under the pretense of family visits, the East German dropped all travel to the West. As the Berlin border was controlled by the four occupying powers, many East Germans and Eastern Bloc citizens were able to find ways through Berlin to the West. By the end of the 1950s, nearly 90% of refugees came through the border at Berlin. Since there was no natural border and there were even subway train access to East Berlin, Berlin was considered by many to be the most efficient way for crossing into West Germany.

This problem was doing plenty of damage to not only East Germany but Eastern Bloc countries for more than a decade. In 1961, the border issue came to a head and on 12th August 1961, Walter Ulbricht, the First Secretary of the Socialist Party and GDR State Council Chairman tied the border and built a wall to separate East & West Berlin.

The construction of the wall started at midnight on Sunday 13th August 1961. The Berlin Wall was built on the inside of East Berlin and East Germany to assure that none of the Allied borders were encroached on. On 15th August, concrete slabs of the Berlin Wall began to be laid.

With the formation of the Berlin Wall, many citizens of East Germany tried to abandon by climbing over the wall. About 5000 people, fortunately, escaped to West Berlin during the time the wall was erected. Many people also died trying to cross the wall. Being one of the many representations of communism, it is no wonder that with the decline and eventual end of the Soviet Union and communism also came the demolition of the Berlin Wall.

On 9th November 1989, GDR government decided to allow movement directly through crossing the East German border into the West. The new border crossing arrangements were to be implemented on November 10 to give the border guards enough time to prepare. From November 9 on, the Berlin Wall has quickly chipped away, using sledgehammers, construction tools, etc. The official dismantling of the Berlin Wall began on 13th June 1990. Both the GDR and West Germany agreed to reunify. Reunification officially took place on 3rd October 1990 and the wall collapsed on November 1991.