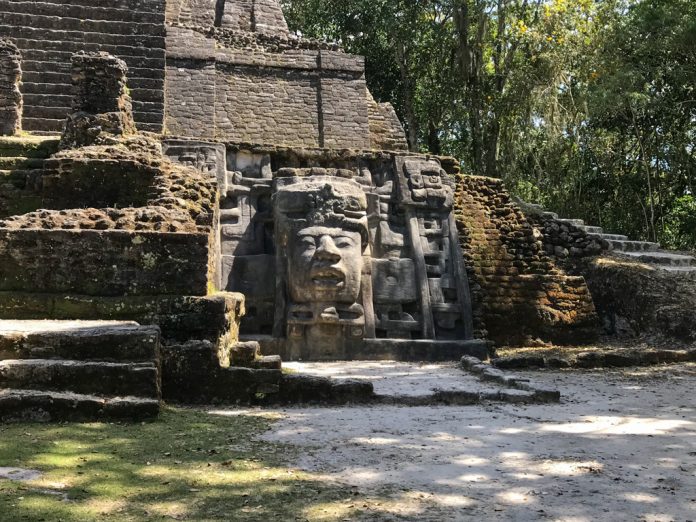 One of the few surviving original ancient Maya city names indicated by the Maya that still exists today is Lamanai. This place itself is discovered in northern Belize on the west bank of the New River Lagoon. The name of Lamanai was reported by the Spanish in the 16th century and carried to light again by historian Grant Jones through his work in the archives in Seville, Spain. The name Lamanai is loosely interpreted as “Submerged Crocodile”. Knowing these two facts tells us two very valuable things, one, the ancient Maya were remaining at Lamanai when the Spanish arrived. And two, the site name indicates the weight of the Morelets’ Crocodile whose remains are seldom found in midden heaps indicating they were rarely utilized due to their important status within the community. As one visits this site, it becomes clear that this translation is fitting because there are numerous representations of crocodiles that appear on ceramics, stone, architecture, and accompanying stucco facades.

An estimated 30 – 60,000 Maya may have remained at Lamanai during the rise of the civilization and the occupational history surpasses many other Maya cities with 3,000 years of uninterrupted human history. This history of occupation carries right through to contact period, and it is the case that the Spanish would not have constructed two churches at this Maya site if there were not a population residing at Lamanai to convert.

The first Spanish church, Structure N12-13, dates to around AD 1570; it was constructed sometime after Lamanai became part of the Spanish system (royal grant to a Spaniard for the right to labor and tribute a native population, who is also liable for Christianizing the natives).

This first church was built over an actual Tulum-style Postclassic building that contained painted murals; in this case, it appears the Spanish were attempting to convert the Maya to Catholicism by exchanging one religious practice for another. The conversion was difficult and the archaeological evidence for this exists in the form of a burned and destroyed first church and the caching of several figurines around and near the churches in traditional Maya fashion.

Although a second Spanish church was constructed, Structure N12-11, eventually the Spanish were never able to establish a stronghold in this area. It was in AD 1638 that there was a comprehensive revolt by the Maya that ended in the withdrawal of the Spanish at least for the time being.

The Late Postclassic and historic/colonial periods at Lamanai are certainly engaging and are what the majority of modern research is focusing on. But the fact that Lamanai has one of the tallest securely dated Preclassic structures in the Maya world, Structure N10-43, symbolizes that it certainly had a strong foundation upon which to build and thrive. This Preclassic center may have been one of the reasons why Lamanai survived what many other major city-states suffered during the 9th century.

It was during the Late Classic period that there was a drop or failure of the Maya civilization that consisted of a political and/or financial breakdown, a possible drought, and perhaps a population increase that firmly stressed the food supply. This decline influenced numerous Classic period city-states such as Tikal, Copan, Palenque, and Caracol. During this time, these city-states were almost totally abandoned and monumental architecture was no longer built, production of pottery declined, and carved stone monuments no longer told the stories of the elite ruling class of the Maya.

Lamanai survived this drop or collapse and there are numerous theories why, one already mentioned is the strong Preclassic foundation, and a second being the development of the city on a large body of freshwater today called the New River Lagoon. During ancient times, as well as modern, this lagoon provided food, a means of transportation, drinking and bathing water, a sacred haven for the revered crocodile, and a suitable environment to carry out sacred rituals.

Due to Lamanai’s closeness to the New River Lagoon, the ancient Maya residing there may have avoided the potential environmental degradation seen elsewhere. It has also been recommended that Lamanai was fairly isolated from other major cities, we know the Maya never had a central, capital city, and that there were regular conflicts during the Classic period. It may have been the case that Lamanai’s somewhat isolated location, to some extent still the case today, again protected it from this decline or collapse.

Ancient and contemporary history of Lamanai mirrors the evolution of the young nation of Belize with occupation by the Maya, Spanish, and British. The British commercial pursuits during the colonial period at Lamanai involved the production of 200 acres of sugar cane by the British who constructed a mill whose success was never seen during the 15 years of operation from 1860 – 1875. The extensive ironworks that was once one of the only steam-operated mills in Belize is settled in the western portion of the Lamanai Archaeological Reserve.