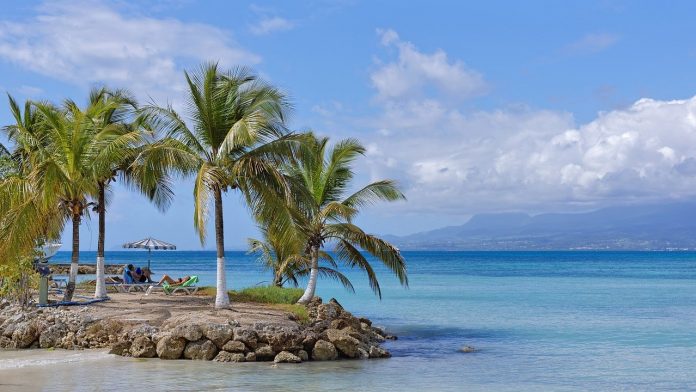 Guadeloupe, known as “the island of beautiful waters“, has the most freakish shape of any island in the Caribbean chain. The butterfly pattern resulted from the geographical movement of two separate islands, which rammed them together, with only a thin river dividing them. Instead of one island, they could be counted as two since there are quite different.

Located in the French, West Indies, Guadeloupe has three sets of oceanic islands, which offer guests an occasion to island-hop. Aside from the possibility to visit several islands for the price on one, Guadeloupe offers first-class beach resorts, some of the Caribbean’s most desirable outdoor markets, French and Creole cuisine, rain forests, volcanoes, numerous waterfalls, diversity of beaches, and a species of exotic flowers and plants.

That’s more than sufficient for one vacation, but courageous souls can simply continue their travel by catamaran or ferry to the neighboring islands of French Martinique, Dominica, and St. Lucia.

The history of the island is French, however, most locals speak Creole and French. Overall the culture of France, Africa, West Indian, and Hindu makes a captivating mix.

The people of Guadeloupe believe firmly in their form of culture, and many would like to be autonomous from France. However, financial support from France provides the island with a high standard of living, so the pressure for independence remains more talk than action.

Basse Terre is the larger of the two, with a healthy coastline, mountainous terrain, and, wink..wink, an active volcano. The west coast rich highlands offer a picturesque view of lush rainforests, banana plantations, and a waterfall at every turn. As you enter the rainforest, your visual senses are bewildered by the fusion of colors, the shapes of orchids, flowering trees with loads of exotic flowers, and the ever-present dwarf palms. Odd clanking sounds ring out through the forest, and you will be astonished to find the strange noise was being made by the huge Hercules beetles.

After leaving the rainforest you can go and explore La Soufriere, an active volcano that hovers 4,800 feet and has steam continually spurting from its top. Transcoastal Highway is the best route to the volcano, however, you can also choose the southern route.

The volcano is mystical and you can spend hours enjoying nature, the skies, and the green surrounding it.

Grande Terre, the smaller of the two island masses is on the eastern coast and considered the low lands. You will be thrilled to see wonderful white sand beaches, along with clear water, and pristine coral reefs. This side of the island is an oasis for tropical birds such as pelicans, egrets, doves, and sandpipers. While the west coast is home to lush rainforests, the eastern coast has countless rows of sugar cane fields and mangroves.

Heading east from Pointe-a-Pitre, there are 20 miles of the most flawless beaches any soft, white sand beach lover could hope to find. The farther you drive from the capital city, the beaches grow less crowded.

You can finally rest in the small town of Gosier which has the perfect soft, white sand beaches, lots of little bars, shops and cafes, bread and breakfast inns, along with big hotels.

Gosier is on the coast and the rises into the hills where you can enjoy the out islands of Marie-Galante and Les Saintes.

Several islands, only one life.