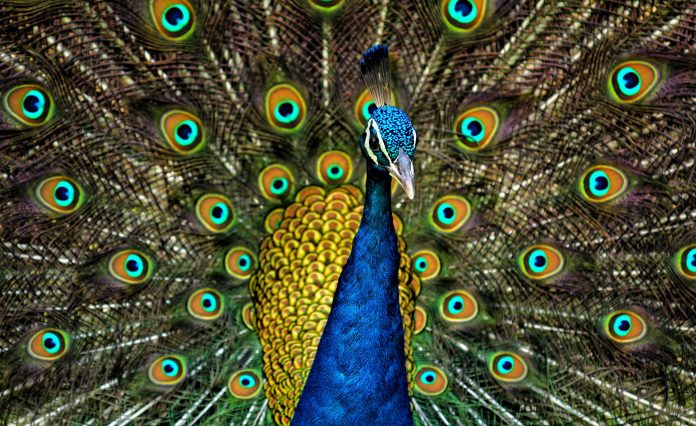 Peacock or Peafowl is a common name for three species of birds in the genera Pavo and Afropavo of the Phasianidae family, the pheasants and their allies. Male peafowl are called peacocks, and female peafowl as peahens, though peafowl of either sex are often referred to colloquially as “peacocks.” The two Asiatic species are the blue or Indian peacock originally from the Indian subcontinent, and the green peafowl of Southeast Asia; the one African species is the Congo peafowl, native only to the Congo Basin. Male peacocks are known for their piercing calls and their extravagant plumage. The latter is especially prominent in the Asiatic species, which have an eye-spotted “tail” or “train” of covert feathers, which they display as part of a courtship ritual.

The Indian peacock has bright blue and green plumage, often metallic blue and green, but the green peacock has green and bronze body feathers. In both varieties, females are as big as males but lack the train and the head ornament. The peacock “tail”, known as a “train”, consists not of tail quill feathers, but extremely elongated upper tail coverts. These feathers are stamped with eyespots, best seen when a peacock fans his tail. Both sexes of all species have a peak atop the head. The Indian peahen has a blend of dull grey, brown, and green in her plumage. The female also exhibits her plumage to ward off female opponents or signal danger to her young.

Green peafowl differs from Indian peafowl in that the male has green and gold plumage and black wings with a shine of blue. Unlike Indian peafowl, the green peahen is comparable to the male, only having shorter upper tail coverts, a more coppery neck, and overall less iridescence. The Congo peacock male does not display his covert feathers but uses his actual tail feathers during courtship performances. These feathers are much shorter than those of the Indian and green species, and the ocelli are much less obvious. Females of the Indian and African species are dull grey and/or brown.

Chicks of both sexes in all the classes are cryptically colored. They vary between yellow and tawny, usually with patches of darker brown or light tan and “dirty white” ivory.

Charles Darwin proposed in On the Origin of Species that the peafowl’s feathers had evolved through sexual selection.

The sexual conflict is of two kinds; in the one, it is between individuals of the same sex, generally, the males, to drive away or kill their rivals, the females enduring passive; whilst in the other, the struggle is likewise between the individuals of the same sex, to excite or charm those of the opposite sex, generally the females, which no longer remain passive, but select the more amenable partners.

Sexual selection is the ability of male and female organisms to exert selective forces on each other concerning mating exercise. The strongest driver of sexual preference is gamete size. In general, eggs are bigger than sperm, and females produce fewer gametes than males. This leads to eggs being a bigger venture, so to females being choosy about the traits that will be passed on to her offspring by males. The peahen’s reproductive success and the likelihood of survival of her chicks are partly reliant on the genotype of the mate. Females generally have more to lose when mating with an inferior male due to their gametes being more costly than the males.

Multiple hypotheses attempt to explain the evolution of female choice. Some of these suggest direct benefits to females, such as protection, shelter, or nuptial gifts that influence the female’s choice of mate. Another hypothesis is that females choose mates with good genes. Males with more pronounced secondary sexual characteristics, such as bigger, brighter peacock trains, tend to have more salutary genes in the peahen’s eyes. These better genes directly benefit her offspring, as well as her fitness and reproductive success. Runaway preference also seeks to clarify the evolution of the peacock’s train. In runaway sexual selection, linked genes in males and females code for sexually dimorphic traits in males, and preference for those traits in females. The close spatial association of alleles for loci involved in the train in males, and for preference for more exuberant trains in females, on the chromosome (linkage disequilibrium) causes a concrete feedback loop that exaggerates both the male traits and the female preferences. Another hypothesis is sensory bias, in which females have a preference for a trait in a nonmating context that becomes transferred to mating. Multiple causalities for the evolution of female choice is also possible.

Work concerning female behavior in many species of animals has sought to confirm Darwin’s basic idea of female preference for males with certain characteristics as a major force in the evolution of species. Females have often been shown to distinguish small differences between potential mates and to prefer mating with individuals bearing the most exaggerated characters. In some cases, those males are more healthy and vigorous, suggesting that the ornaments serve as markers indicating the males’ abilities to survive, and thus their genetic qualities.

The peacock’s train and bright plumage are perhaps the best-known examples of traits believed to have arisen through sexual selection, though with some controversy. Male peafowl erects their trains to form a shimmering fan in their display to females. Marion Petrie tested whether or not these displays signaled a male’s genetic quality by studying a feral population of peafowl in Whipsnade Wildlife Park in southern England. The number of eyespots on the train predicted a male’s mating success. She was able to manipulate this success by cutting the eyespots off some of the males’ tails: females lost interest in pruned males and became attracted to untrimmed ones. Males with fewer eyespots, thus with lower mating success, suffered from greater predation. She allowed females to mate with males with differing numbers of eyespots and reared the offspring in a communal incubator to control for differences in maternal care. Chicks fathered by more ornamented males weighed more than those fathered by less ornamented males, an attribute generally associated with better survival rate in birds. These chicks were released into the park and recaptured one year later. Those with heavily ornamented feathers were better able to avoid predators and survive in natural conditions. Thus, Petrie’s work has shown correlations between tail ornamentation, mating success, and increased survival ability in both the ornamented males and their offspring.

Zahavi claimed that the long train would be a handicap.

Furthermore, peafowl and their sexual features have been used in the discussion of the cases of sexual traits. Amotz Zahavi used the excessive tail plumes of male peafowls as evidence for his “handicap principle”. Since these trains are likely to be deleterious to an individual’s survival (as their brilliance makes them more visible to predators and their length hinders escape from danger), Zahavi argued that only the fittest males could survive the handicap of a large train. Thus, a brilliant train serves as an honest indicator for females that these highly ornamented males are good at surviving for other purposes, so are preferable mates. This theory may be contrasted with Ronald Fisher’s theory (and Darwin’s hypothesis) that male sexual traits are the result of initially arbitrary aesthetic selection by females.

In contrast to Petrie’s findings, a seven-year Japanese study of free-ranging peafowl concluded that female peafowl does not select mates solely based on their trains. Mariko Takahashi found no evidence that peahens preferred peacocks with more elaborate trains (such as with more eyespots), a more symmetrical arrangement, or a greater length. Takahashi determined that the peacock’s train was not the universal target of female mate choice, showed little variance across male populations, and did not correspond with the male physiological condition. Adeline Loyau and her colleagues responded that alternative and possibly central explanations for these results had been overlooked. They concluded that female choice might indeed vary in different ecological conditions.

Source: Wikipedia, LiveScience, Darwin, Charles. (1871), The Descent of Man and Selection in Relation to Sex