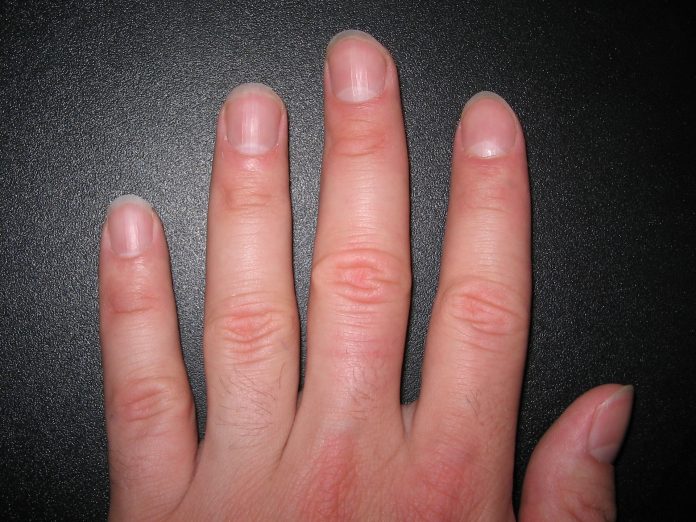 A nail is a horn-like keratinous envelope covering the tips of the fingers and toes in most primates. Nails evolved from claws found in other animals. Fingernails and toenails are made of a strong protective protein called alpha-keratin which is seen in the hooves, hair, claws, and horns of vertebrates.

The quick answer is we have evolved to have nails because they help us pick things up (like food), pick things off (like bugs), and hold tightly onto things.

Early humans who had these types of nails (instead of claws) managed to live long enough to have babies and pass on the fingernails gene to their kids. So over time, the number of human ancestors with nails started and the number with claws shrunk. That’s how evolution operates. Damn Yes!

The nail is an unguis, meaning a keratin structure at the end of a digit. Other examples of ungues include the claw, hoof, and talon. The nails of primates and the hooves of running mammals evolved from the claws of earlier animals.

In contrast to nails, claws are typically curved ventrally (downwards in animals) and compressed sideways. They serve a multitude of functions—including climbing, digging, and fighting—and have undergone numerous adaptive changes in different animal taxa. Claws are pointed at their ends and are composed of two layers: a thick, deep layer and a superficial, hardened layer that serves a protective function. The underlying bone is a virtual mold of the overlying horny structure and therefore has the same shape as the claw or nail. Compared to claws, nails are flat, less curved, and do not extend far beyond the tip of the digits. The ends of the nails usually consist only of the “superficial”, hardened layer and are not sharpened like claws.

With only a few exceptions, primates retain plesiomorphic (original, “primitive”) hands with five digits, each furnished with either a nail or a claw. For example, nearly all living strepsirrhine primates have nails on all digits except the second toe which is equipped with a grooming claw. Tarsiers have a grooming claw on second and third toes. Less usually known, a grooming claw is also found on the second pedal digit of owl monkeys (Aotus), titis (Callicebus), and possibly other New World monkeys. The needle-clawed bushbaby (Euoticus) has keeled nails (the thumb and the first and the second toes have claws) featuring a central ridge that ends in a needle-like tip. In tree shrews, all digits have claws, and, unlike most primates, the digits of their feet are positioned close together, and therefore, the thumb cannot be brought into opposition (another usually distinguishing feature of primates).

A study of the fingertip morphology of four small-bodied New World monkey species showed a correlation between increasing small-branch foraging and:

This suggests that whereas claws are useful on large-diameter branches, wide fingertips with nails and epidermal ridges were required for habitual locomotion on small-diameter branches. It also symbolizes keel-shaped nails of Callitrichines (a family of New World monkeys) is an acquired postural adaptation rather than a retained ancestral condition.