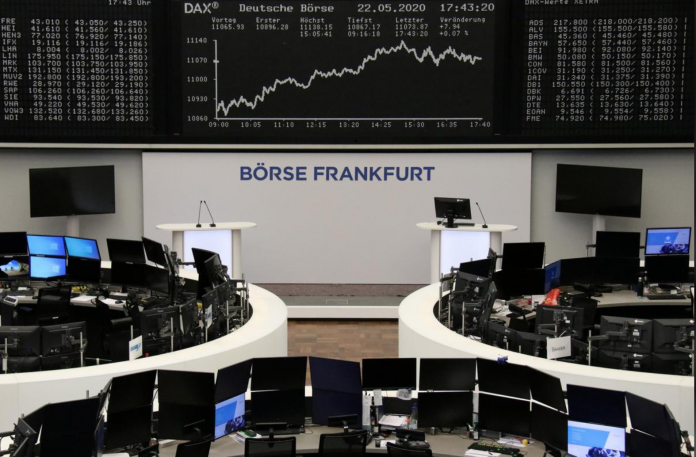 European shares rose in thin trading on Monday, as optimism over reopening of countries and signs of more stimulus for the coronavirus-hit euro zone economy helped sentiment.

Germany’s Bayer AG (BAYGn.DE) provided the biggest boost, gaining 6.3%, after saying it had made progress in seeking a settlement over claims its Roundup weedkiller causes cancer.

Trading volumes were lower across the board with the U.S., UK and some countries in Asia closed for holidays.

Despite growing U.S.-China tensions stalling a recovery for equities in May, investors focused on the positives amid signs that many European economies were coming back to life.

French authorities reported the smallest daily rise in new coronavirus cases and deaths on Sunday, while Spain is set to reopen international tourism from July, Prime Minister Pedro Sanchez said over the weekend.

Ifo Institute’s survey for May showed German business morale rebounded after a dramatic fall in the previous month, and an economist said Europe’s largest economy is beginning to see light at the end of the tunnel.

“The main theme in the market is that the global economy is steadily reopening like floodgates slowly lifting,” Sebastien Galy, macro strategist at Nordea Asset Management said.

Hopes of more stimulus are also running high after minutes of the European Central Bank’s latest policy meeting suggested it was ready to expand its Pandemic Emergency Purchase Scheme as early as June if economic data warrant such a move.

All eyes will turn to the European Commission’s recovery plan on Wednesday after EU member states Austria, Sweden, Denmark and the Netherlands stated their opposition to a French-German plan for a 500-billion euros coronavirus recovery fund.

Among other individual movers, Lufthansa (LHAG.DE), in talks with the German government over a 9-billion euros bailout, rose 1.8% after a company spokeswoman said it would resume flights to 20 destinations from mid-June.

Travel group TUI AG (TUIGn.DE) jumped 10.6% on plans to resume flights to main holiday destinations in Europe by the end of June, its chief executive officer told a German newspaper.