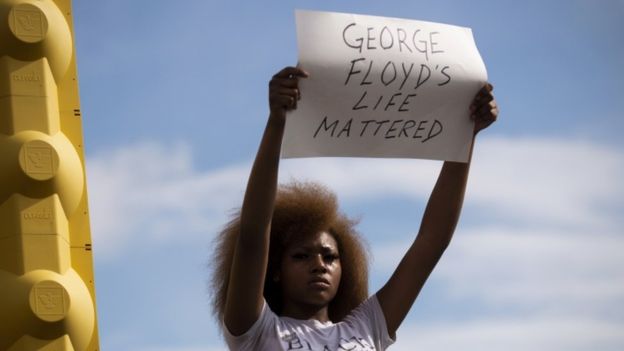 Clashes erupted between protesters and police in the US city of Minneapolis over the death of an unarmed black man in police custody, the media reported.

Video footage emerged showing, George Floyd, 46, groaning “please, I can”t breathe” and “don”t kill me” as a white policeman kneels on his neck after officers on Monday responded to reports of the use of counterfeit money by the victim, reports the BBC.

The video taken at the scene does not show how the confrontation started.

As bystanders urge officers to let him go, Floyd ceases to move and an ambulance arrives to take him to hospital where he later died.

The protests that continued on Wednesday began on Tuesday afternoon, when hundreds of people came to the intersection where the incident had taken place.

Organisers tried to keep the protest peaceful and maintain coronavirus social distancing, with demonstrators chanting “I can”t breathe,” and “It could”ve been me”.

A crowd of hundreds later marched to the 3rd Precinct, where the officers involved in the death are thought to have worked.

Squad cars were sprayed with graffiti and protesters threw stones at the police building.

Four police officers have been fired and Minneapolis Mayor Jacob Frey also called on prosecutors to file criminal charges against the policeman who was filmed holding Floyd.

“Being black in America should not be a death sentence. For five minutes we watched as a white police officer pressed his knee into the neck of a black man. For five minutes. When you hear someone calling for help, you are supposed to help.”

The FBI is investigating the incident and will present its findings to the Minnesota state”s attorney for possible federal charges.

Allegations of police brutality have been constantly highlighted since the start of the Black Lives Matter movement, the BBC said in the report.

It began after the acquittal of neighbourhood watchman George Zimmerman in the shooting death of African-American Trayvon Martin in February 2012.

The deaths of Michael Brown in Ferguson and Eric Garner in New York in 2014 sparked huge protests.

Police in Georgia are also accused of trying to cover up the killing of black jogger, Ahmaud Arbery.