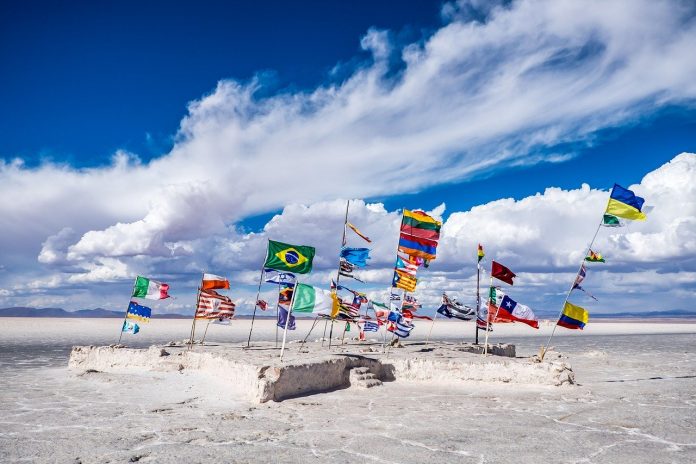 A flag is usually a portion of fabric that is rectangular and will have a distinguished design on it that will be used as a decor, a symbol, or as a signaling device. Flags have been used by humans for more than 8000 years and the oldest flag that has been discovered is that of India from the Indus Valley Civilisation. There have been many restorations of Vexilloid that have been found in Egyptian tomb carving and ancient Greek coins, etc. The term Vexilloid is given to the first type of flag and the study of flags is known as Vexillology. The word Vexilloid comes from the Latin word which means ‘guide’. The flags of early age were wooden or metal poles that had carvings on the top and it was only about 2000 years ago that fabric or a material similar to fabric was added to some of the Vexilloid for ornamental purposes. That led to the flags that we know of today and we have been using it for ages.

Flags as seen today, made of a piece of cloth representing a particular entity, were invented in the Indian subcontinent or Chinese Zhou dynasty (1046-256 BCE). Chinese flags represented colorful animals and royal flags were to be treated with a similar level of respect attributed to the ruler. Indian flags were often triangular and decorated with attachments such as yak’s tail and the state umbrella.

During the peak of the age of sail, beginning in the early 17th century, it was customary (and later a legal requirement) for ships to carry flags designating their nationality; these flags finally evolved into the national flags and maritime flags of today. Flags also became the favored means of communications at sea, resulting in various systems of flag signals.

Flags have been used for a diversity of reasons and the most prominent of them is to send out a sign. In classical days, knights used to carry flags so that they could be recognized by friends and foe as it was difficult to know who was behind the densely clad armors. Some flags describe countries and territories and some flags are used for florid purposes. Many businesses and companies around the world also have flags and often the symbol or the logo of the organization forms a major portion of the flag. Clubs are also recognized to have their flags and so do the numerous defense forces of the countries. All countries in the world have a flag of their own and the flags normally give out some knowledge regarding the account or the origins of the country.

A flag is normally bright and there will be a lot of distinct colors present in flags. Each color that is used in a flag symbolizes something and has some specific meanings. Let us have a look at what shades mean when used in flags.

Some flags are used for conventional purposes and many other flags are used for decorative purposes. You have flags that describe seasons, festivals, special events, sports clubs, sports organizations, religion, heroes, music, and a lot more. The national flag of a country will have certain restrictions about usage and the limitations tend to differ from one country to the other. If unlawfully used, there could be constitutional proceedings instigated against you for hurting the sentiment of the country or for disrespecting the flag. Therefore if you are planning to use the flag for any occasion, do check out the do’s and don’ts while using the flag to be on the secured side.