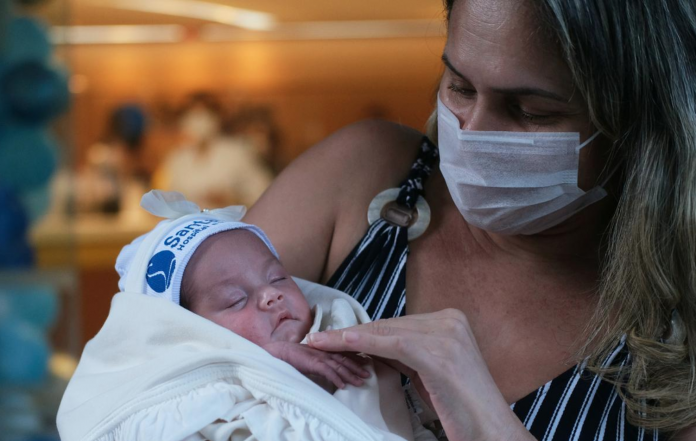 Brazilian nurse Rusia Goes gave birth while unconscious and breathing through a ventilator tube in April as she battled severe COVID-19 symptoms.

It would be nearly a month before the 42-year-old was reunited with her newborn daughter.

“Only God knows how much I missed that little one, who had been inside me, and all of a sudden was taken out because of all of this,” she told us in an interview on Monday.

Goes is one of at least 374,000 Brazilians infected by the virus, now the world’s second-biggest outbreak after the United States. Over 23,000 people have died.

While she normally works as a nurse in a neonatal intensive care unit, Goes stayed home once the coronavirus outbreak started. But her husband Ednaldo Goes suspects he may have transmitted the virus to her as he continued to go out to work and shop for the family.

When Rusia Goes checked into a Rio de Janeiro hospital with shortness of breath and other COVID-19 symptoms, she was just beginning the eighth month of her pregnancy. Doctors recommended a premature birth by cesarean section to better treat the mother’s condition.

The baby tested negative for the virus and was isolated from Goes, who was transferred to another hospital as her condition worsened.

She said the battle with the respiratory disease was hard and “very painful,” but slowly she was able to recover. She first met her daughter Luisa virtually, via a video link to her husband and the baby in another hospital.

Goes was finally released from the hospital after two weeks and first met her daughter in person on May 20 – some 26 days after giving birth. Masked medical staff gathered with balloons and applauded as Goes left the hospital with her baby in her arms.

“To hold her to my chest was so emotional,” she said.