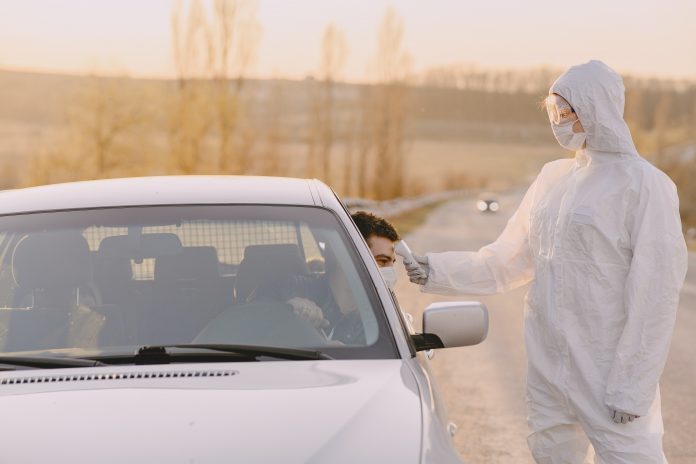 Thermal imager or Infrared Camera detects infrared energy emitted by materials at temperatures above 0 Kelvin and further works in collaboration with pixel imaging.  And converts the received data into a thermal image which then displayed by the camera.

The Thermal Imager can detect the target accurately even from the range of 6 feet.  It is contactless, which makes it less infectious. Thermal Imagers can’t be used on shiny surfaces or glass.

This uses a sensor called thermo-fire, which turns the incoming infrared radiation into heat using tiny thermocouples. The thermocouples will further convert that heat into an electrical signal which will be displayed on the screen in the form of a temperature reading.

It is reliable and cost-effective and gives contactless service. But it can only read the temperature for a single point at once that is why it is also called a “Thermal gun”. If one needs a measurement for a larger area, one has to take multiple temperature readings.

Thermal Imaging technique under Thermal temperature scanners has a vast role in medicine, both for humans and Animals. Fever in human beings and other warm-blooded animals can be easily detected by Thermal Temperature Scanners. Thermal Imaging scanner is being used widely for the screening of patients in epidemic like COVID-19. Also it has been used for SARS and EBOLA viruses in past.

Animals’ body temperature can indicate various severe problems they are facing. The Growing use of Thermal imager to fit horses with safer saddles is the best example here. Thermal technique can also detect problems like inflammation and lameness.

Thermography is also used in Law enforcement and defence sector. Like in managing surveillance activities, locating suspects, investigating crime scenes with proper search, and in rescuing.

Thermal scanner simply detects threats and movements of the enemy on the battlefield. Smoke-filled rooms can be analyzed easily and also locating things like weapons and illegal chemicals can be done.

Aerospace uses Thermal temperature scanning technology due to its high safety and material requirements demand. It tests active heat flows on new composite materials so that, next generations’ aircrafts safety and fuel efficiency can be ensured.

Well, Thermal Imagers are being used here to monitor the internal and external temperature. It shows the thermal behaviour of components as per the standard value. It also identifies vehicle defects easily through temperature changes. It performs various tasks like quality check of electrical system and window heating elements, to ensure the efficiency of automobiles.

Here, the thermal imaging helps to detect the heat flow while chemical processes. Because of this it becomes easy to know the temperature distribution with an accurate collection of relevant data. The contactless nature of a Thermal imaging procedure makes it saviour for the human being.

In the Electrical field, it prevents workers from having direct contact with circuits. Problems like a loose connection, poor contacts, Overheated bushings, and Blocked passage can be detected through a Thermal infrared imaging scanner technique. Also, Tastings can be done without interrupting the power flow. It is useful in monitoring the Overheating issues in the systems circuit and detecting the insulation breakdown.

Infrared thermography has an essential role in the construction field. A good assessment of the area is needed based on the emission properties of the building materials. It is useful to detect the moisture penetration details, presence of voids in the concrete, newness and toughness of the concrete. Thermal temperature detectors also help in evaluating the performance of conduits, pipelines, etc.

In-plant Inspections, Infrared thermal system gives great detection without interfering with the normal operations. It simply makes the whole procedure safer by ensuring no risk to maintenance personnel. It simply inspects the whole system, if there is any fault found, it detects that. Thermal imaging technique reduces time and provides accurate results.