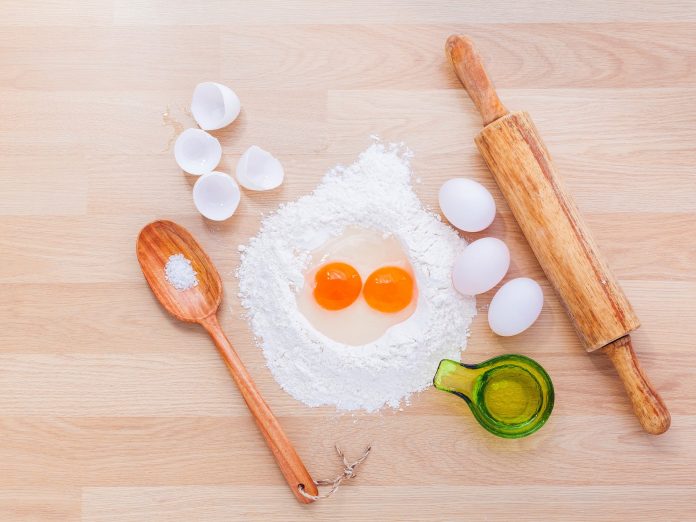 Baking is a method of preparing food that uses dry heat, normally in an oven, but can also be done in hot ashes, or on hot stones. The most common baked item is bread but many other types of foods are baked. Heat is gradually transferred “from the surface of cakes, cookies, and breads to their center. As heat travels through, it transforms batters and doughs into baked goods and more with a firm dry crust and a softer centre”

Baking has been many cultures’ favorite technique for creating snacks, desserts, and accompaniments to meals for many years. Now, it is very well-known as the method for creating sweets and all sorts of wondrous mouthwatering pastries. In ancient history, the first evidence of baking occurred when humans took wild grass grains, soaked it in water, and mixed everything together, mashing it into a kind of broth-like paste. Then, the paste was cooked by pouring it onto a flat, hot rock, resulting in a bread-like substance. This happened in ancient Indian Civilisations. Later, this paste was roasted on hot embers, which made bread-making easier, as it could now be made anytime fire was created. Around 2500 B.C., records show that the Egyptians already had bread, and may have actually learned the process from the Indians. The Greek Aristophanes, around 400 B.C., also recorded information that showed that tortes with patterns and honey flans existed in Greek cuisine. Dispyrus was also created by the Greeks around that time and widely popular; was a donut-like bread made from flour and honey and shaped in a ring; soaked in wine, it was eaten when hot.

In the Roman Empire, baking flourished widely. In about 300 B.C., the pastry cook became an occupation for Romans (known as the pastillarium). This became a very highly respected profession because pastries were considered decadent, and Romans loved festivity and celebration. Thus, pastries were often cooked especially for large banquets, and any pastry cook who could invent new types of tasty treats, unseen at any other banquet, was highly prized. Around 1 A.D., there were more than three hundred pastry chefs in Rome alone, and Cato wrote about how they created all sorts of diverse foods, and flourished because of those foods. Cato speaks of an enormous amount of breads; included amongst these are the libum (sacrificial cakes made with flour), placenta (groats and cress), spira (our modern day flour pretzels), scibilata (tortes), savaillum (sweet cake), and globus apherica (fritters). A great selection of these, with many different variations, different ingredients, and varied patterns, were often found at banquets and dining halls. To bake bread, the Romans used an oven with its own chimney and had grain mills to grind grain into flour.

Eventually, because of Rome, the art of baking became widely known throughout Europe, and eventually spread to the eastern parts of Asia. Bakers often baked goods at home and then sold them in the streets-children loved their goods. In fact, this scene was so common that Rembrandt illustrated a work that depicted a pastry chef selling pancakes in the streets of Germany, and young children surrounding him, clamoring to get a sample. In London, pastry chef sold their goods in handcarts, which were very convenient shops on wheels. This way, they developed a system of “delivery” baked goods to people’s households, and the demand for baked goods increased greatly as a result. Finally, in Paris, the first open-air café of baked goods was developed, and baking became an established art throughout the entire world.