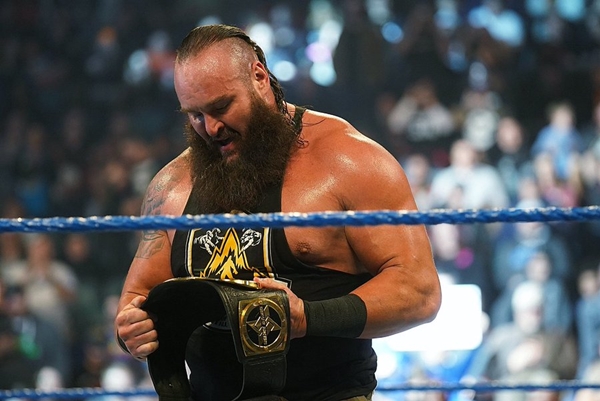 WWE has announced that new Universal Champion Braun Strowman will be appearing on this week’s SmackDown broadcast.

Also, Alexa Bliss and Nikki Cross vs. The Kabuki Warriors for the WWE Women’s Tag-Team Championships in a rematch from WrestleMania 36 will take place on the show:

The Monster Among Men earned a career-changing win at WrestleMania and heads to SmackDown to usher in his new reign as Universal Champion.

Braun Strowman fought off not one, not two, not three, but four vicious spears before delivering four consecutive Running Powerslams and conquering WWE Hall of Famer Goldberg at The Show of Shows for the title.

The Monster Among Men absorbed four spears from the Universal Champion and continued battling in pursuit of the title. Catch WWE action on WWE Network, FOX, USA Network, Sony India and more.

What will the future hold for Strowman now that he carries the crown of Universal Champion? Will a new challenger step up and run the risk of getting THOSE hands?

Alexa Bliss & Nikki Cross backed up their claim as deserving Women’s Tag Team Champions with a hard-fought victory against The Kabuki Warriors at WrestleMania 36. Now the two-time champions will have to turn around and prove it all over again.

Bliss & Cross will face Asuka & Kairi Sane in a rematch of the thrilling battle at The Showcase of the Immortals.

Tune in to Friday Night SmackDown at 8/7 C to catch the championship showdown.